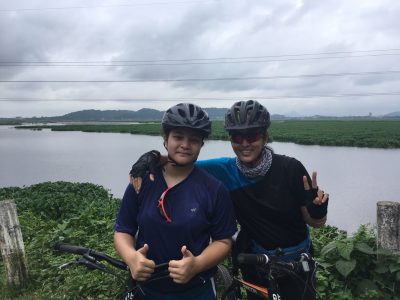 Early morning Cycling can be quite invigorating and have a supremely calming effect at the same time. The icing on the cake for me is when the family joins in for a Ride making it a fulfilling one as well. I have always believed that we owe our children a gift – that of facilitating the rewarding connection between Nature and Self. ‘Nature smart’ is the new mantra and we shall leave them seriously ill-equipped to handle the complexities of Life if we do not help build that connection.

Nature has enough of faculties to educate our little ones and fill their hearts and minds with a million magical wonders. As adults, it is imperative, specially at present times, that we offer them the correct priorities so that they can sort it all out later with ease.

Coming back to my own story! My elder one had recently discovered the joy of riding. This, of course, after a nasty accident, which, thankfully, she escaped with minor bruises to body…… or mind.

We were wondering what would be our destination the next Sunday morning. I suggested North Guwahati. Somehow, I find a kind of peace and thrill while riding along the majestic Brahmaputra and the greenery on the other side.

The Husband gave me the stern look, meaning ‘We are not even discussing this.’ I could understand. The previous week, I had to visit the Doctor and the kind soul had already given me the verdict before the reports came in – Anaemia.

You see with an extremely low Haemoglobin count, though I highly doubt as to its authenticity to the decimal, one had reasons to be alarmed at such misplaced bravado. I decided to play along. I suggested that we go in the direction of our proposed destination and if circumstances necessitated, we’d return. With a highly dissatisfied ‘Hmmph’, the Monarch agreed. Things have to go his way, that is, at least he has to be made to feel so. 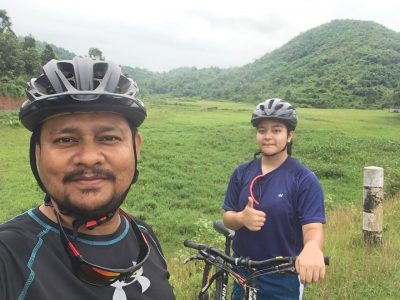 The night before a Ride is planned, is always a difficult one to fall asleep in, for me. My hyperactive mind seems to be somewhat ‘morphinated’ and I almost always count my way till dawn……to a few zillions maybe.
By 4.30 am, we were ready to hit the road.
When we reached the city limits, the ‘Monarch of all he surveys’ sternly announced, ‘Please turn right, ahead.’ Now THIS needed some convincing.
Plan A. ‘What!! I’m perfectly fine and I somewhat feel better with all this extra oxygen getting into the system.’
‘Extra Oxygen’?? Pheww!! If not for the Balaclava I had on, I’d surely have thrown up by now, with all the dust and the stink at places.
The eyebrows remain arched. Plan A fails.
Plan B. ‘I should have come alone. A woman has her rights you know.’
That threat clearly missed making its point. No change. 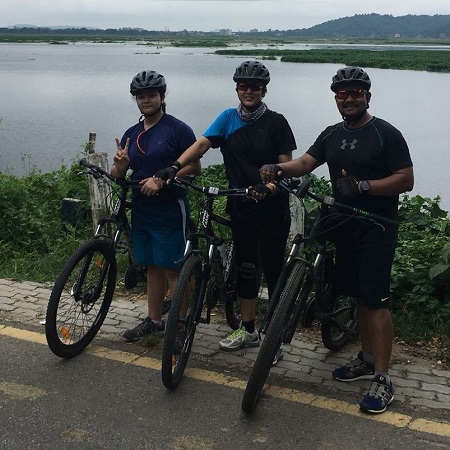 Plan C. ‘It’s MY body and MY haemoglobin. I’ll know when to quit. Can I not have some independence? It’s like 1947 never happened to me.’
An at- a- stretch outburst which leaves the one in front speechless and gaping. He is left wondering open-mouthed at such flurry of complaint. After all, I’m more than allowed to do my own thing given my overtly obstinate self.
Raai was only too happy to chime in after she recovered from the melodramatic outburst of her generally mellow mom.
‘Let’s go Papa. I am fine and can do it.’
Smile of acknowledgement passes between the two conniving females while the monarch muses. ‘Okay, your call. Just don’t pass on your aches to my head. And if you can’t make it, do drag yourselves home and not bother me.’
We shuddered at the imagery yet decided to keep up with the bravado.
‘Done’, in unison. And the Gang was on the roll again.
Cycling on the roads of Guwahati has its pros and cons. While the dust and stink along with the occasional errant driver do seem to almost spoil the fun, the staring faces, as I cycle past, the little children clapping and crying ‘Suwali e cycle solaise’ (a girl is riding a cycle) does give a high.

My best moment yet was when during one such ride within city limits, a girl, waiting for her school bus looked at me wonder-eyed. She said to her mother, ‘Maa, see, she’s riding a cycle. I too want to ride one.’
I could not help sending a silent prayer all the way up for the fulfilment of an innocent wish.

Getting back onto the affairs of that day. We got onto the Saraighat bridge over the Brahmaputra and stopped for some Photo op. The Mister was too angry to smile and we did not ask him to join us for fear of spoiling our ‘Smiling Selfies’.
Selfish, I agree! The poor guy had after all accompanied us all the way, concerned and worrying, WHEN one or the other would topple from the saddle. The smile must have vanished with that imagination of carrying wife, daughter and cycles back home and wondering HOW.

After Selfie time and water break, we continued. Cycling while gazing at the river’s expanse always makes me feel vulnerable and grateful at the same time for this beautiful life and its various joys including the one I would be indulged in at that moment.
On reaching the northern bank of the Brahmaputra, one is greeted by a glorious sight of greenery. I love to cycle soaking in all that beauty. The air also seems cleaner and easy to breathe in. The streets along the houses, almost all with a small prayer room in the courtyard, are magical.
Our plan that day was to visit the Bamboo Bridge and we eventually made it after getting lost and regaining our way. When I complained about him not getting the directions correctly, the Mister said ‘Why? It’s some ‘extra oxygen’ for you. Remember, you love it!’
Well, he got me there. KARMA holds for speech as well, you see.

The view atop the bamboo bridge near Rajaduar Ghat was beautiful. To experience the beauty and tranquillity of the place was indeed rewarding. The simplicity in Nature’s beauty sometimes leaves one speechless.
The sight of the fast-flowing waters from amidst the green leaves was indeed quite pleasant. The cool breeze sort of relaxed the aches and pains, strengthening us for the ride back.
Return was by Ferry across the Red River and on cycle from the Ghat. We took directions to the Ghat and were lucky to have Bittu, a 9-year-old curious lad, charmed by our cycles and in turn charming us with his helpful nature, while showing us the way.
We made ourselves comfortable on the tin roof of the Ferry. It’s a cool ride indeed, atop the Ferry on the Brahmaputra. And that humbling sensation again, that feeling of insignificance before majestic Nature while being lost in its glory.
The ride back home was enjoyable and a bit difficult after a filling breakfast on the way. But we made it in one piece and myself with my 6.3 Hbg still flowing in my veins or perhaps a little more thereafter.
Later in the day, when the Husband was in a better mood and I was lazily preparing lunch, he mentioned something about being my happiest self on the Saddle. 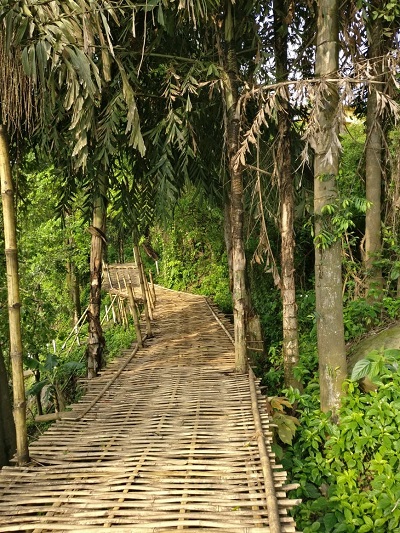 Indeed, it is so! Especially when I have my Family riding along.
Besides an inexplicable joy fills me when I see Gen next enjoying their time on the saddle. The bond with Nature that nurtures impressionable minds and nourishes seeking souls is at its blossoming best in such moments, after all! 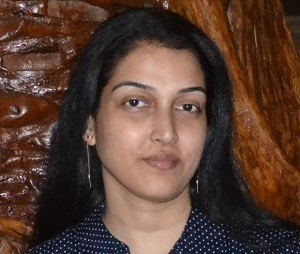 Sangeeta Bhattacharjee is an Educator, Media Professional, Sports & Adventure Enthusiast. Travelling is her Passion along with Writing. She is also associated with her Husband’s adventure tourism-based company Natventure www.facebook.com/natventureindia/ , www.natventure.in Guwahati. She believes making our Gen Next Nature-Smart is an absolute must in the present times besides raising health and fitness related awareness among women. 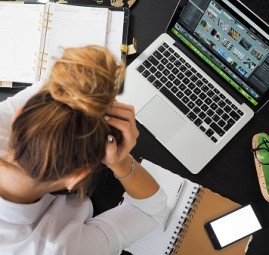 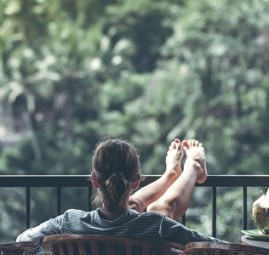 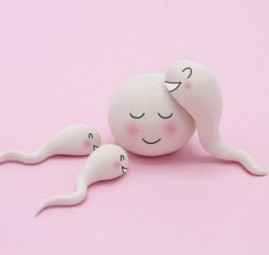 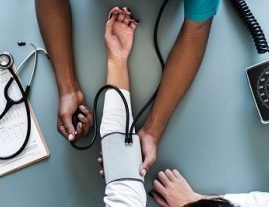