This Work Is No Child’s Play- reality of child labour 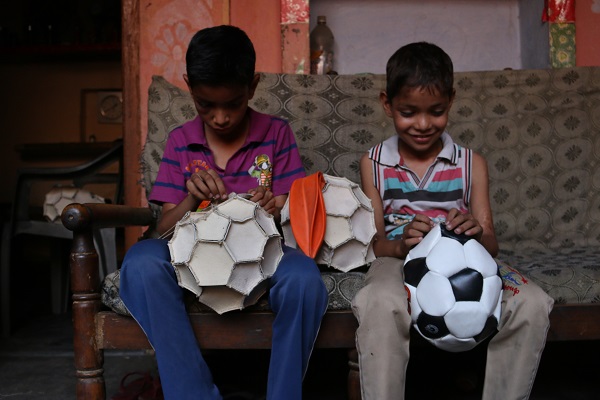 Keshav Sagar, 13, lives in Siwal village, near Meerut in Uttar Pradesh. His everyday routine revolves around football. But unlike his counterparts in the big towns, this teenager stitches them – to earn a small living. He proudly declares: “My brother and I help our mother and we stitch the best footballs in the area. I think stitching them is far tougher than scoring a goal.”

Young Saira Bano, who lives in Miya Mohammed Nagar near Keshav’s village, takes out time after school and household chores to bind books to add to her family’s income. She gets bone tired by the end of the day but there is no way out of this.

Keshav and Saira are among the hundreds of thousands of children who are going through childhood juggling multiple roles – they try to strike a balance between schooling and work, leaving little time to have fun, which is the right of every child. When one talks of home-based workers, images of poor, exploited women come to mind. However, child labour adds a whole new dimension to this narrative, especially now that the newly amended Child and Adolescent Labour (Prohibition and Regulation) Act allows children of up to 14 years to work in their ‘family trade’ after school. 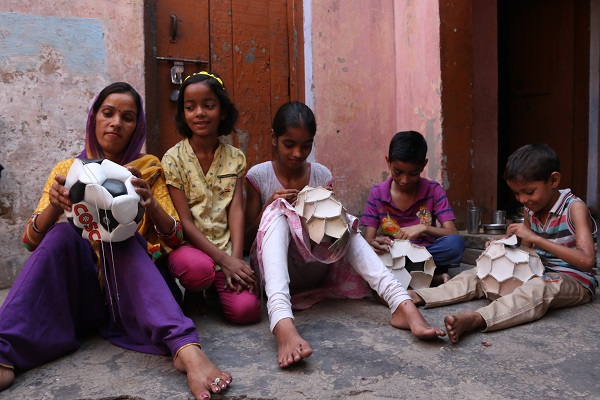 Meerut is known for quality sporting goods, including football as well as cricket bats, balls and stumps. But this fame comes with the infamy of widespread child labour.

In most homes in the hamlets dotting the area there are youngsters like Keshav and his brothers who painstakingly contribute to the manufacturing line of the very goods that most of them don’t even have time to play with themselves. Added to that is the risk of injury and other health issues later in life.

Keshav says, “There are many times when my hands bleed because the needle pierces through my skin. It usually happens when I am in a hurry. But then that’s one way in which we can stitch more and earn more.”
So, how much do they make on an average? Good quality work fetches anywhere between Rs 10 to Rs 15 per football depending on the finish and uniformity of the stitch. It takes a day or two to finish stitching a football and between them the family can make eight balls which translate into Rs 120 per day. 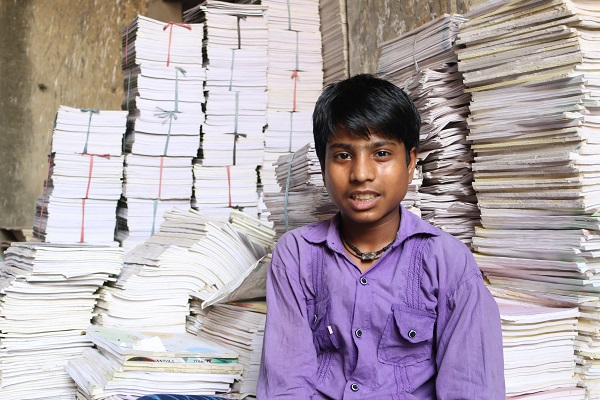 Does Keshav not get tempted to kick around a ball or two? Not really, as he already has a packed day. The contractors make two trips a week to pick up the balls and their deadlines are strict. “Earlier, due to our difficult circumstances, I had dropped out of school but I have rejoined recently because I realise that though I may not be getting great quality education, I do need to learn to read and write properly.

However, that leaves me with virtually no time for fun and games. Once I’m back I know I have to get to my other ‘work’, which is very important for all of us, especially my mother who has many chores to do besides this,” he elaborates, with wisdom and understanding that belies his young age.

Of course, the truth is that Keshav may never have gone back to school had it not been for the intervention of the activists of World Vision India, an international humanitarian agency, which is implementing a child labour programme focused on ensuring every child’s right to education.

“There’s no denying the reality that economic compulsions force children like Keshav to earn a living. But it has been our endeavour to motivate them and their parents to send them back to school. This way, at least they get to study.” Apart from awareness building the organisation has set up child care and tuition centres which help dropout children to catch up with their studies. “But it’s tough to keep them there for a length of time because they want to go home and assist their mothers,” he adds. 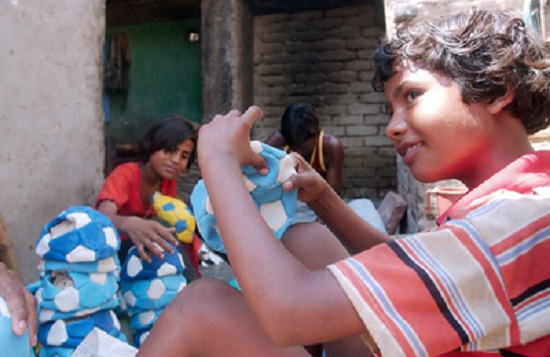 Article 32 of the United Nations Child Rights Convention, of which India is a signatory, specifies that “children’s work should not jeopardise any of their other rights, including the right to education, or the right to relaxation and play”. Yet, Keshav and others have no option but to bear this double load. And since their labour is no longer considered ‘work’, for the longest time they are doomed to be toiling as unpaid paid labourers with little say in their employability or the marketing of the products they produce.

For girls like Saira Bano the work load is only tripled. Everyday before she leaves for school she does the home chores, like cooking and filling water. Thereafter, she’s off for her classes. After a long day with the textbooks she gets back to give food to her younger siblings and then heads over to a ‘relative’s’ home where she works till nightfall binding books. 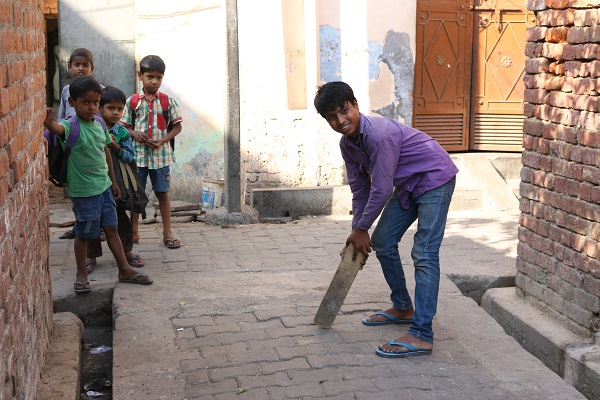 Her younger brother, Mohammad Mohsin, 11, who has just started going to a madrasa is already an expert binder and shows his ‘aapa’ (elder sister) how she can go through the process of stitching the pages and pasting the spine swiftly. The duo works as daily wagers and makes a measly Rs 20 per day – but their father remains ill and it’s up to them to help their mother make ends meet. There are times when they have to miss school. “If the work is not done on time the contractor might refuse to pick up the books and then all our labour might be in vain; what good will that do,” reasons Saira.

In the past, contractors used to be wary of police raids and inspections but that’s not the case anymore. Children, on their part, are convinced that this is their best choice, so they find ways to derive joy from what they do. For instance, Mohsin says shyly, “I like binding the books with my sister, more so nowadays, as I can read a few lines from them. I like the company of books.” 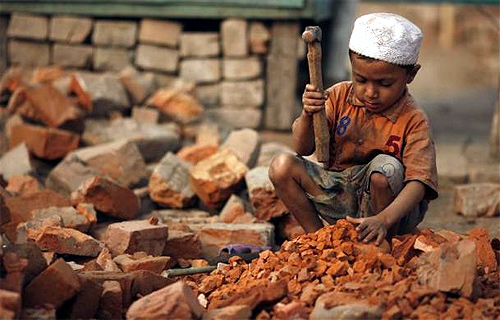 It is certainly a complex issue. If poverty forces them to pick between destitution and back-breaking work, it also ensures that school or no school, they can’t overcome their adverse conditions because interrupted, half-hearted education means little in the long run. In the absence of child rights or labour rights, they don’t have much to look forward to.