Theater in the streets- tackling child marriage in Bangladesh 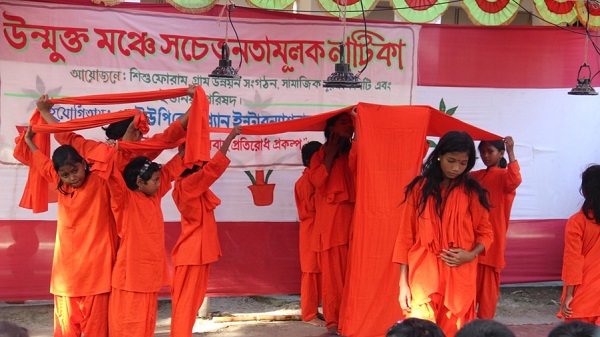 A dozen girls – ranging from 8 to 18 years of age and dressed in vibrant-orange floor-length robes – sing, dance and wave colourful flags under a white canopy by a primary school. As the noise escalates, locals begin peering out their doors and through their curtains; quiet chatter breaks out among those on the street, as people watch the commotion that has erupted in the otherwise calm and quiet village.

Minutes later, swarms of locals begin making their way to the white, shaded canopy, with makeshift wooden benches, plastic chairs and platforms in tow. They gather in clusters and people begin to spill out of the shaded canopy, encircling the stage filled with the youth performers and the back-up musicians playing local instruments and narrating the show.

For the next 30 minutes, more than 200 villagers are there to witness these sought-after performances. Adorned by gasps, laughter and thunderous rounds of applause, the community watches as the young actors on stage illustrate the story of Moyna, a young girl who escaped an illegal child marriage through the use of her birth certificate.

While the show is cushioned with jokes and soap opera-like scenes, unbeknownst to the community, they are engaged in critical issues impacting their village and everyday life.

TFD is more than just a play and an expression of dance and movement: it’s about enabling individuals to tell their own stories and engage in dialogue on issues identified by the community. TFD empowers the community to actively participate on issues that are normally too sensitive to discuss or too taboo to be shared in the open. “To me, we can reach a huge number of people through the TFD show, which is not otherwise possible with a meeting, training or workshop. In this show, we welcome people of all ages, genders and professions to come and join. Our audience accepts the diversity,” says youth mentor of the TFD programme Tulshi Chakrabarti from Plan’s partner organisation, Shomaj Unnoyon Proshikkhon Kendro (SUPK).

Critical to audience attendance are rural women, who all too-often are denied the chance to leave their homes. Plan and its partners thus focus on arranging TFD shows in hard-to-reach locations, so rural women and their families can join the show.

“After watching the show, audience members better understand the consequences of early child marriage and the advantages of birth registration. As the performance is conducted in the local dialect, it is easily understood by everybody and we hope the messages will stay in their minds for a long time,” adds Tulshi.
CAUSING A STIR
Once the show is complete and after plentiful thank yous, handshakes and questions, the youth are met by their TFD mentors. The young girls sit together and begin to reflect on their performance and the impact of the message they were trying to convey.
“You see, the parents tried to marry the young girl off. They requested a Kazi [a community member who is authorised by government authorities to administer legal registrations for marriage] for support, but he did not support the child marriage,” explains one of the youth actors.

The pivotal moment in the show, the children explain, is when the Kazi pulls out Moyna’s birth certificate to prove that she is too young to be married.

“He knows that child marriage is a crime and if the marriage is registered, the parents and other persons involved will be punished,” they describe.
Central to the show’s message on child marriage is educating the community about the role of a Kazi in stopping an illegal marriage and most importantly, how the Kazi can use a birth certificate to prove the child’s age.
Addressing the community in a facilitated discussion after the TFD show, Salma Sultana from Plan explains the role of Moyna: “In the show, we visualised only one Moyna, but in our society we have many Moynas who experience child marriage, but none that actually want to be married as young girls. In our portrayal of Moyna, we wanted the community, especially the parents, to understand the pain that Moyna goes through as she is dealing with child marriage and the consequences of her family’s actions.”
As Tulshi concludes, “I think the TFD show can play a huge role on the birth registration issue. This performance combines the issue of birth registration and child marriage, as they are linked. But not only did we show the birth certificate stopping a marriage, we showed how the certificate can help someone have a successful life and access all the services provided by the government.”

Plan International Bangladesh works with local partners to carry out more than 450 Theatre for Development performances on different child protection issues every year. With 12 children per group, and on average six groups per Plan working area, the youth-led TFD groups reach more than 596 villages and communities in Bangladesh.

ACTION NEEDED
Bangladesh has the second-highest rate of child marriage in the world, second only to Niger. A 2013 report commissioned by Plan demonstrates that 64% of all women aged 20–24 were married before the age of 18.
Birth registration has the potential to play a crucial role in reducing child marriage, but this is reliant on enforcement of existing laws and comprehensive systems in place to register major life events, including deaths, marriages, adoptions and births.
Child marriage, birth registration and the wider spectrum of civil registration and vital statistics (CRVS) are high on the agenda of governments in Asia as they look beyond the Millennium Development Goals and towards the post-2015 agenda.

This piece was originally published on Girls Not Brides: The Global Partnership to End Child Marriage