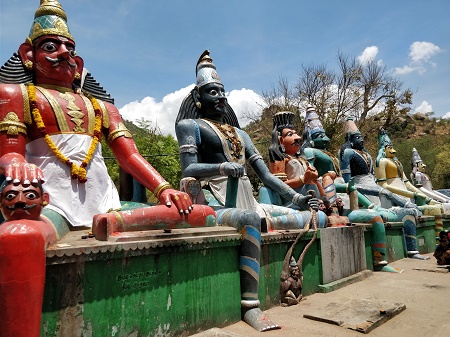 Anyone planning a trip to Tamil Nadu, is most likely to have towns like Madurai, Kancheepuram, Thanjavur etc. on their itinerary. These places are world famous for their temples, which act as torchbearers to the region’s glorious heritage and are repositories of magnificent art forms which evolved over 2,000 years.

Zipping through the state on road, the lofty towers of the temples dotting the skyline command piety, but what also attract attention are the gigantic, colorful, expressive and sometimes fearsome images of deities in the open fields and villages, often surrounded by images of elephants and horses. These open deities stand out in sharp contrast to the refined and sculpted images of Gods found in the inner precincts of the towered temples. While they evoke wonder and intrigue in the minds of the travelers, most view them as good photo-ops and move on without spending much time to understand their significance or the legend behind them.

So who are these deities and what is their role in the lives of Tamilians?

Hinduism in India has been traditionally dominated by the Shiva, Vishnu and Devi cults. These deities are typically housed in grand temples, secure within multi layered chambers and enjoyed the patronage of rulers. They are mediated and controlled by the Brahmins, the religious elite of the society. Gorgeously decked in jewels, silks and flowers, and venerated with sacred hymns and offerings by the priests, these Gods inspire reverence, devotion and faith in the devotee’s minds. The philosophy of the scriptures and the mythology of these Gods placed them on a high pedestal and people looked up to them to show the path to divine salvation. But at the same time, the villagers of Tamil Nadu felt the need to pray to Gods who were more tangible and could address their day-to-day problems of livelihood, security and family.

They felt constrained by the restrictions imposed by the Brahmanical order of the larger temples and preferred having additional places of worship where they could anoint priests from their own communities and worship as per their customs. They believed in the power of deities to steer them out of hardships and also give warnings of supernatural sanctions when any norms were broken. Hence, when some calamity struck the village, all castes first worshipped the village deity. Thus these deities came to be revered as guardian deities and their power continues unabated, notwithstanding the popularity of the Supreme Gods.

Given the antiquity of Tamil culture, these village deities could well have been existing in folklore even before the mainstream Hindu Gods like Shiva and Vishnu gained prominence in this land. Notably, though the great Gods remain in the background in this cult, the village deities are connected to them through their creation myths, thus providing them noble family lineages and high positions in divine hierarchy. For example, the story of Ayyanar, who is born of the union of Shiva and Vishnu (in the female form of the enchantress Mohini), gives him the stamp of high lineage.

The statues are visually expressive and their iconography can reveal the status of featured deities, their membership in the Shaiva or Vaishnava lineages, their relationships, marital status, even names and nature, ranging from a benevolent mildness to a fierce bloodthirstiness that is satisfied with regular sacrifices—goats, pigs, and chickens. Temple premises usually include images of many deities but never in random combinations. Unlike the Gods of mainstream Hinduism, having recorded texts of their legends and myths, knowledge about the village deities remains in the latent memory of the villagers, until it is expressed orally or through their ritualistic behavior. The village priests, mostly from the non-brahmanical class, called the ‘Poosaris’, control the deities and also the oral traditions, called ‘aideegam’ about them.

Guardianship thus has two meanings. First, all deities guard the village and protect the believers who worship them in rituals. The Warrior gods, like Ayyannar or Karuppaswamy will be placed on the outskirts, to better protect from outside dangers. Some are warriors elevated to hero status and called upon now to bring protection, like Madurai Veeran, a Tamil hero.

In almost every Tamil village there is a shrine of Ayyanar, who is regarded as the watchman of the village, and is supposed to patrol every night, mounted on a ghostly steed, a terrible sight to behold, scaring away the evil spirits. By making nightly riding tours, deities are believed to control their territory. They defend village borders from demons, witchcraft, and evil powers that threaten people from outside. As stealing and robbing is a major concern for the villagers, the deities also turn their fierceness against those criminal intruders who act under the cover of darkness.

Secondly, some deities are subordinate to the others and serve them as their guardians. Peaceful gods, like Mariamman, will be in the center of the village. Some are guardians for Shiva or Parvati (sages turned into warriors).

Painted terracotta (clay) figures are often used to represent these gods and protectors. The colorful, gigantic and expressive deities and their mounts, white horses and elephants, are usually alone or stand guard outside a temple of the Mother Goddess, called Amman. Amman is worshipped in different places under different names, which again are based on the special powers she holds there to protect her worshippers from disease and enemies. Some of her incarnations are Kamakshiamman, Darupadiamman, Kaliamman, Parashakti, Pachayamman, Ellaipidari, Durga etc. The Munis are a group of male guardians which are classified as Shiva Gana, attendants of Shiva (and Parvati).

The Munis could refer to former warriors, kings or sages who achieved the status of a Muni after their human death. Whether these are Hindu or Tamil is not clear. There are ancient associations with what appears to be Siva in the Indus Valley Culture, which is thought by many to be the precursor to the Tamil culture. Because of this, I include them in this post the ancient guardians. Here is a row of seven Munis at Pachchai Amman Koil, in Parvatamalai. 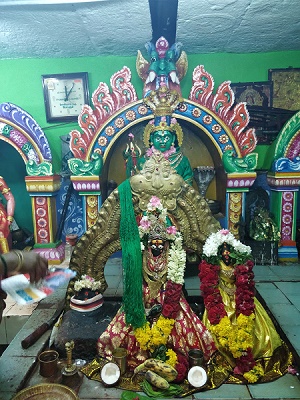 Legends about the interaction between gods and humans are thus set in the mundane reality of historical time, providing models of religious and social behavior. One of the main functions of legends is to link social reality with the supernatural sphere and to affirm the active participation of deities in the everyday life of villages. There is a widespread belief in the studied region about encountering the deities at night, when they ride around their territory to protect it from evil powers.

So, the next time you visit Tamil Nadu, do take time to speak to the local people about their guardian deities and you are most likely to come away with very fascinating stories not found in written texts!

Also Read; The Culture of Kali the Secular Goddess 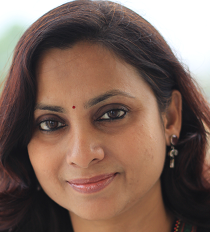 Comment: loved ur article. i am interested in knowing the names and history of each of those deities in the picture.

Comment: Wow. You have done good background work to collect these details. Good write up in the area which is usually over looked by non tamils who visit tamilnadu.