Myanmar: Inspiring Men To Do Right By Women 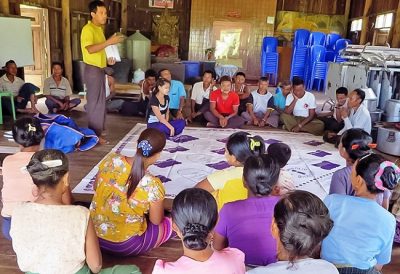 At a community center, teaching through games

Rakhine state - Tin Moe Tun farms for a living, but he is also trying to cultivate something else in his little village of Tha Lu Pyein, in Myanmar: an understanding among the men that it’s not okay to demean and attack women and girls. The hamlet is poor, and economic opportunities are hard to come by. Many of the men want to live ‘freely’ and don’t like outsiders telling them what to do; some of them find solace in alcohol or while away their time at the local tea shops. Of course, the comfort these ‘distractions’ offer is short-lived, and an evening’s drinking can result in the men taking out their frustrations over work – or the lack of it – on their wives and daughters.

“But the situation is far from hopeless,” assures Tin Moe Tun, a ‘male role model’ volunteer who regularly speaks with the men in the community to impress upon them that women and men deserve the same rights, to live in safety and also have a say in village affairs. He frequents the tea shops and other common gathering places and uses anecdotes and games to engage with his fellow villagers. “Women will [eventually be able to] participate in the decision-making process in village development activities… [with] the men empowering and supporting them,” he says, adding, “So this is where I focus my efforts.”

Tin Moe Tun is one of 20 men in the two ethnic areas of Kayah state and Rakhine state, whom the NGO ActionAid Myanmar has trained to become role models, as part of a project to stem violence against women by challenging social and cultural norms. This initiative is supported through a grant from the UN Trust Fund to End Violence against Women (UN Trust Fund). These men promote a safe family environment, share their knowledge of women’s rights with other men, and join other men to organise groups to protect women. ActionAid Myanmar’s project on ‘Promoting Access to Justice: Towards a Violence-free Environment for Women and Girls’ is also working with women and girls in 40 communities in the country to lessen attacks and promote women’s access to justice.

Violence against women, particularly domestic violence perpetrated by husbands, is widespread in Myanmar, and occurs more commonly in the rural areas. It is rooted in traditional patriarchal beliefs and customs, weak public institution and law enforcement, and the practice of settling violent incidents by simply handing over monetary compensation.

Tha Lu Pyein, Tun’s village, located in Rambree township of Rakhine state, on the western coast of Myanmar, has a population of 392 people of mostly Buddhist and Rakhine ethnicity, who essentially survive on farming and fishing. At 31, he is married to Ma Win Win Naing, who works as an accountant at a development organisation in Rambree, and is a paralegal trained by ActionAid Myanmar to provide help and support to her fellow villagers. The couple has one daughter 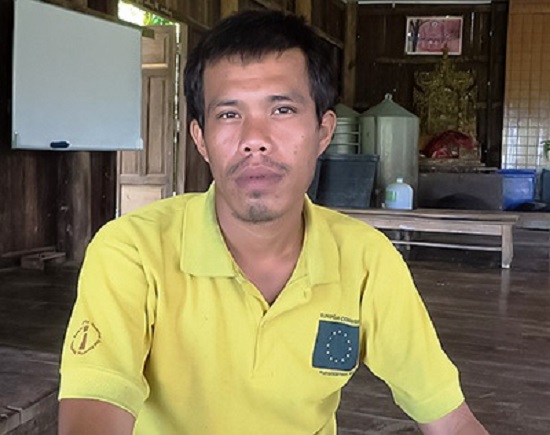 Tin Moe Tun does not have any educational background in human rights, but says he grew up with an instinctive sense of social justice. He understood that the women in his village had fewer job opportunities and were adversely affected by violence. In 2013, when Legal Clinic Myanmar visited Tin Moe Tun’s village to conduct a training workshop on anti-violence in collaboration with ActionAid Myanmar, he joined in, and after attending several sessions, began serving as a male role model. In February 2015, the village’s Anti-violence against Women Committee, led by Tin Moe Tun and Ma Win Win Naing, got the township administrators to ban all alcohol sales except with the consent of the villagers. This meant that the nearest alcohol shop is now located nearly two to three hours away. Consequently, cases of domestic violence have decreased since then, and are expected to keep decreasing with the sustained system of education and awareness building that Tin Moe Tun is implementing. While alcohol consumption is a known factor in increasing violence, there is more that needs to be done in the community to bring about sustainable change.

Tin Moe Tun leads monthly community meetings on good governance and people’s rights. To make the sessions fun and participatory, he uses specially created toolkits that include games on topics like gender equality, different forms of violence and their impacts on people of different backgrounds. He shares that while most villagers usually agree with him, men aged 20-30 are the least receptive group.

Many of the men tend to object to outside humanitarian groups interfering in their community life. Realising that this could become a hurdle in effecting real change and to trigger a major shift in the attitudes of the male population, Tin Moe Tun makes it a point to sit with the men as one of their own, at tea shops or in their homes in the evenings. He presents anecdotal problems as talking points: ‘How do you build an elevator in the cheapest way and without taking too much space? How do you get a car through a tunnel that is lower than the height of the car?’ These seemingly benign questions lead to discussions on the development of the village, the political and ethnic conflict in Rakhine state as well as women’s rights. These free-wheeling conversations create a comfortable and non-confrontational environment which enables him to introduce sensitive subjects.

According to Tin Moe Tun, when he brings up the problem of excessive drinking, some men confess that they know they shouldn’t indulge in it as it affects their ability to make rational decisions. When they talk about sexist cultural norms, some reply that they feel that women actually have more rights than them in the village. They say they have to follow the rules set by their wives, give them all their income, and live in fear of them.

In the past three years, Tin Moe Tun has seen violence in the village steadily declining and credits this to education. He says that so far he has managed to at least get four men to stop beating their wives, which is creditable. They are two farmers, 40 and 48 year old, respectively; a mason, 30; and a fishing net maker, 39. Times and attitudes are slowly changing as men become more understanding and compassionate.

Comment: whoah this blog is wonderful i love reading your posts. Keep up the great work! You recognize, lots of people are looking around for this information, you can aid them greatly. My homepage - web hosting reviews

Comment: Hello! This is my first comment here so I just wanted to give a quick shout out and tell you I really enjoy reading your articles. Can you recommend any other blogs/websites/forums that cover the same topics? Thanks for your time! adreamoftrains hosting services best web hosting