Winters used to be the worst. It was inevitable that sooner than later I’d get the call from my sister that our mother ended up outside her apartment in frail condition or I’d receive a phone call from the police notifying me she had been picked up and would be put on hold in the psyche ward. Winter season was the season of sleeping on egg shells for me, never knowing what was going to happen. Our Mother is mentally ill homeless drug addict as well as my Father who lives in another state.

Since I could remember she’d always been an alcoholic and in and out of rehab, but then she started doing meth, and literally lost her mind. One year later she was diagnosed as a paranoid schizophrenic. She refused to stay on the medication or go to her appointments that we’d beg, plead and even at times force her to go to. I watched a beautiful lively woman transform to this stranger right before my eyes. She used to sing like an angel, and now she would talk angrily at the voice she hears. She used to laugh and make people laugh, and I can’t even remember the last time I saw her laugh. She used to love to take baths and smell like the perfume Vanilla Fields, and now she’ll go months without showering or washing her hair.

My sister and I did everything we could. We got her into several board and cares, and she got kicked out of all of them besides one where we pay for her to stay at till this day even though she probably only spends a few nights a month there. She chooses to still roam the streets and do drugs. We’d take her to buy clothes and a few days later we’d find her with no shoes, wearing someone else’s rags and no idea where she left her new things. We’d bring her care packages for them to be given away to someone in her board and care. 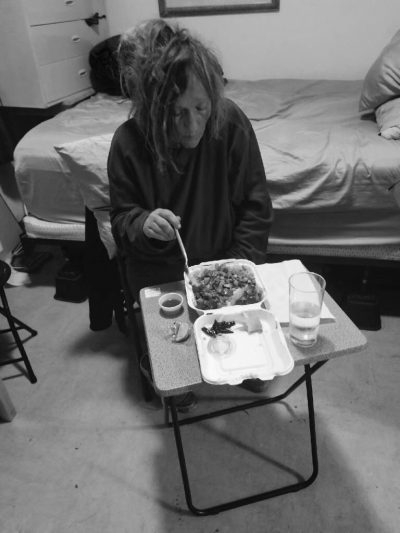 Once when we got her home

I helped get her an apartment for the mentally ill through her case worker, and within months the complex kicked her out for disorderly conduct.

My sister and I would go on hunts during the rainy winter nights. Some of the times we’d find her roaming Monterey Road, talking to herself, or at some drugee’s dilapidated house. One time I had her stay in a spare room of my house for a week after finding her behind a garbage bin coming off of drugs. It proved to be impossible to keep her in my house while raising a family. We came home one day to cheese slices hanging all over our walls and furniture in the shapes of a cross. I had to put her into a shelter afterwards until we could find her another board and care. We put her in the psyche ward several times to just get medicine in her, but due to California’s laws pertaining to the mentally ill it was hopeless keeping her there long enough to get stable.

I’ve driven past my Mom walking the streets with my two small children in the car, and had to introduce them to their Grandmother under those circumstances, because I couldn’t bare just driving past her. This cycle continued every year up until a little over a year ago. My sister found her and I was to pick her up to take her shopping for clothes. As soon as she got into my car she was angry and started cussing at me, calling my children names, and in all honesty scared me enough where I started praying in the car with her sitting beside me mocking and laughing at me. She got so verbally violent that I had to pull over and let her out of the car, and as she got out there was a moment of clarity in her eyes, and she told me she loved me.

I watched my Mom walk away looking and smelling just as you can imagine a homeless woman looks and smells. That was the last time I saw my Mom. I had to end the toxic cycle of trying to force help she doesn’t want. I accepted that day that it was extremely unhealthy for me mentally and emotionally.

A few months later my Father was incarcerated, and contacted me from jail. I’m not sure why the jail didn’t have him on medication, but I could tell from our phone calls and letters that he clearly needed psychiatric treatment and medicine. Each week he would get angrier and angrier at me, accusing me of conspiring against him, and proceeded to be so hostile I no longer had the emotional capacity to even answer his calls. The letters got increasingly mean, accusing me of absurd things and the last letter I opened was a birthday card to me that said “I hope you choke on this b***”. I had decided that I had to let him go too. Even though he wasn’t part of my life growing up, and I was so happy to have reconnected with him as an adult and had this vision of him being a grandfather to my children, I had to let that vision and him go for the same reason I had to let my mom go. I could no longer afford the cost of my emotional and mental well-being for people and circumstances I have no control over.

It’s all part of the process and journey towards evolvement, and I know that now. That feeling gives me a sense of not only control but relief from being burdened of the responsibility of keeping people and situations in my life.

Letting go is absolutely necessary to evolve. Christ has let us go with the choice to recognize his grace and live our lives loving him, and I’ve realized that too is how we shall love others. We can let go of someone and still love them from a distance, sending them love in our thoughts and prayers. Protecting our energy space though is absolutely essential so that you can focus your energy on the things in life that are enhancing and beneficial to your purpose. Living a purposeful life of intent takes sacrifice, time and patience so that you can evolve to that serene peaceful level of your being. 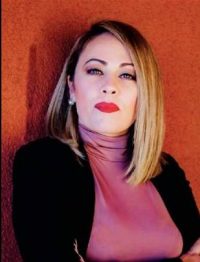 Shareen Rivera is a published author of two best-selling books, as well as a women’s speaker and host of a YouTube channel, “Rising Above”. She has turned the lessons and wisdom gained from pain into her life’s purpose, and is dedicated to helping women heal and overcome childhood trauma and abusive relationships, and believe in themselves to start over, just as she has. Visit her website to learn more at www.shareenrivera.com.

Her Youtube Channel is: www.youtube.com/c/ShareenRivera. Her books are “to love again” and “Raw Confessions of Heartache to Healing: My Journey to Empowerment”; both can be found on Amazon or her website.