Kumartuli or the Potters Quarters- an artisan story 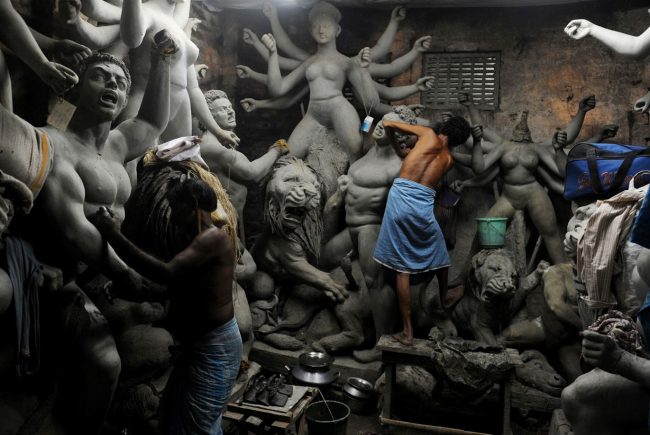 The clay idols of the Goddess Durga and her children, along with Mahisasura are famous across the world though this is a festival exclusive to the Bengalis everywhere. It is an international event and the beauty, perfection and precise detailing of the idols do not find comparison with any similar man-made craftsmanship and artistry anywhere in the world. The clay image makers are an institution unto themselves. Their work spreads out to include festivals of idol worship. Add to this the detailed and perfect idols of national leaders, spiritual personalities, and historical figures are included in the average Kumartuli potters or idol maker’s portfolio.

In 1757, Lord Robert Clive and the East India Company won the first military victory for British arms on Indian soil at the Battle of Plassey defeating the Moghul Nawab. According to Ray, the story goes that members of the urban Hindu elite of Calcutta who supported the British decided to celebrate it with a Durga Pooja. Clay images were then made by the craftsmen of Krishnanagar. Most of them later migrated to Calcutta and settled in Kumartuli. The name Kumartuli is derived from kumore meaning potter which the craftsmen originally were and tuli meaning their small place of shelter. As Calcutta grew as a centre of trade and administration during the British rule, these potters by caste became the core settlers of Kumartuli Potters Quarters.

Ganesh Chandra Pal, recuperating from a stroke some years ago that paralyzed one side of his body, supervisedthe work of his artisans. In an interview, he recalled, “My father Jatin Pal, was the chief artist at the Marble Palace. I like to be known as Bhaskar Ganesh Pal, ‘bhaskar’ meaning sculptor. Most of us graduated from the Government College of Art in Kolkata. I passed out of the Indian Art College, which was then run under the Lalit Kala Akademi of Delhi. My sons, my nephews and all the men in the family are art college graduates. Among our ancestors was one Jadu Pal. We are told that the then-Governor would arrive at Krishnanagar, our ancestral place, and literally wait for him at his house to invite him to Calcutta. Jadu Pal taught at the Art College many years ago.” 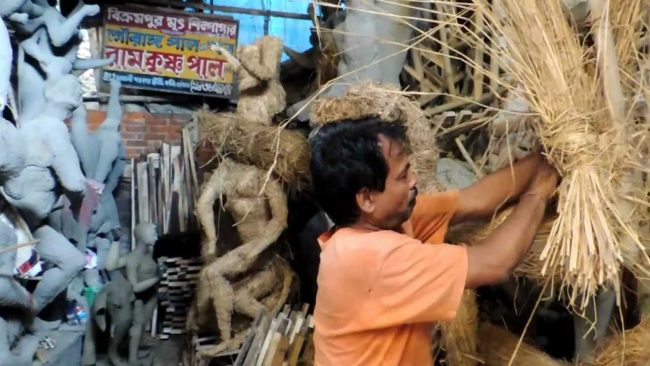 Today, the artisans also travel as far as Assam and sometimes, beyond Indian shores in order to make a living. Another smaller centre of clay image making has grown up in the south of the city around Kalighat called Poto Para (the neighbourhood of portrait painters) near the great Kali temple.

“Satellite” production units, totally indigenous in nature, supported by and supporting the workers at Kumartuli are considerable. The bamboo traders, the men who sail off into the mid-rivers to extract the clay that is needed for shaping the idols, the straw, the jute that is used for styling the hair, the indigenous colors are the ancillary small-scale and cottage industries that draw considerable revenue for their upkeep from Kumartuli which in turn, depends on them for their work. This offers employment to some workers thus reducing unemployment to some extent among the uneducated and illiterate. 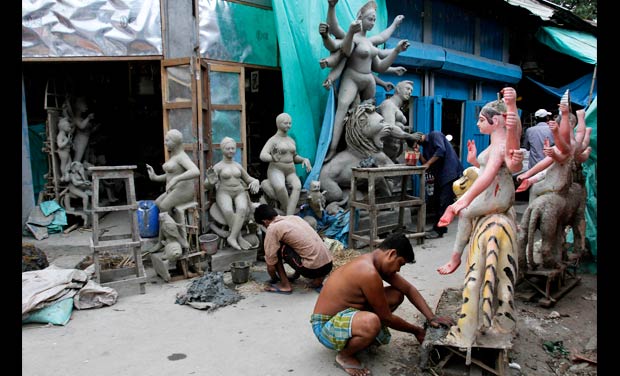 The Goddess in making Image credit The Deccan Chronicle

On Chaitra Sankranti, the last day of the Bengali year, the 527-and-odd families and 300 artisans who, by heredity, are marked out as idol sculptors of Kumartuli, perform a ritual puja before putting their hands on dry bamboo sticks to form the first skeleton of the first Durga idol that will come out of the work shed before the Durga Puja festival.

Kumartuli is the largest hub of Durga idols on the outskirts of Kolkata. The smell of wet clay from the Ganges and other rivers, the dry crackling of straw beneath one’s feet, the criss-cross patterns of bamboo spread out within the narrow confines of a ramshackle, eight-by-eight (8×8) studio, blend seamlessly to create the traditional homes of the artisans where Goddess Durga takes ‘birth.’ 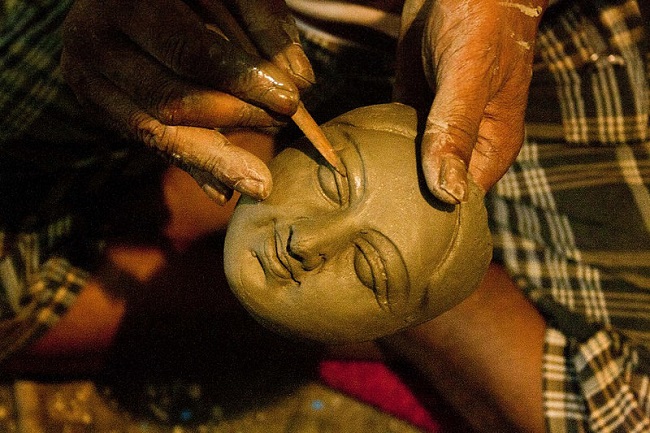 Sadly, there is very little active and live documentation of the work of these world-class artisans. Kumartuli comprises of a narrow tract of cheap walls and tiled roofs, tin sheds and plastic awnings that lead to narrow lanes. The workshops where the artisans work are so confined that they seem claustrophobic. Their struggling lives and limited spaces have recently been captured by filmmaker Ranajit Ray in a 52-minute film called Documentation of Clay Image Makers of Kumartuli. The film unfolds the story of this unique art form that recreates itself through its artists year after year, without break within very limited conditions of geography, space, lighting and lifestyles. The film won the National Award (Rajat Kamal) at the 62nd National Film Awards 2014.

“There is no archival record about the history of Kumartuli barring few references in some old articles published in some books on history and tradition of Calcutta and few old photographs and some old and recent news paper articles published during or before the Durga Puja festival. But I found them insufficient because some facts and figures are very old and mostly written without proper survey. I was amazed to find how people living in such squalid condition can create such beautiful art,” says Ray. 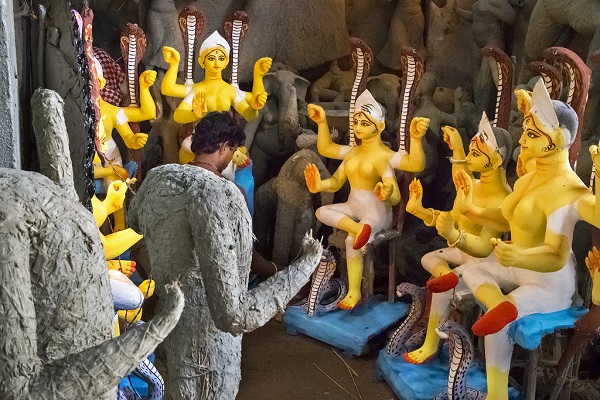 Kumartuli grew out of three little villages, viz., Gobindapore, Kalikutta and Sutanooti way back in 1690. The history of the Kumartuli potter can be traced back to Krishnanagar in South Bengal. To begin with, near about the middle of the seventeenth century, potters in search of better livelihood came from Krishnanagar to Gobindapore, a prosperous village on the banks of the river Bhagirathi (now the River Hooghly), to eke out a living by making earthen ware pots, clay toys and cooking utensils for household use. When the British East India Company for building Fort William required the land at Gobindapore, the inhabitants migrated further up the river to Sutanooti. The potters moved in to their new destination, colonized a vast area and named it Kumartuli

One story goes like this. Raja Nabakrishna Deb brought the Pals to Calcutta. He wanted to celebrate Durga pooja in honour of the British victory at the Battle of Plassey in 1757. The story goes that he summoned a young Pal family member from Krishnanagar to make the clay image for his puja. Eventually several other well-to-do families wanted to follow the Raja’s example. As a result the Pals was inundated with work and complaining because he had to travel from Krishnanagar asked for a permanent residence for himself and his apprentices. His wish was granted and Kumartuli was established in the north of Calcutta as a centre for clay art.

The artisans offer the rare experience of the spirit of the pooja much before the drums begin to play on Maha Shasthi and then fade away as the idols are immersed in the muddy waters of the river Hooghly on Bijoya Dashami. How does the Kumartuli sculptor respond? “We work round the clock to create exquisite works of art. But it sometimes hurts when we see our own creations being destroyed. Our year-long efforts are sunk without a trace”.