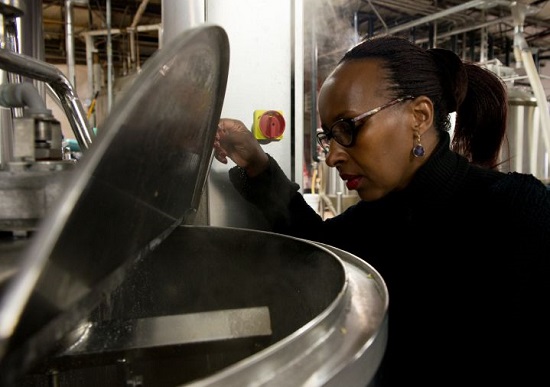 Josephine Uwineza, “Fina” to friends and now Rwanda's brewer. She has always been an entrepreneur and at the age of 53 she’s about to start all over again, this time in the most unexpected of places. Fina is launching Rwanda’s first brew-pub, and it will be 100% women-owned and operated to boot.

“It’s a steep learning curve for me, but I’m up for the challenge. Craft beer is practically non-existent in Central Africa and there are no locally-owned beer producers in Rwanda, never mind a woman-owned and operated brewery. But I’m ready to change that, it’s time for a little market disruption,” Fina says with a laugh. “I don’t believe in coincidences. This opportunity came my way because it was something I was meant to do.”

Confident, right? But Fina is no stranger to challenges.

Together with her mother and five siblings, an 8-year-old Fina fled Rwanda for neighbouring Burundi following her father’s assassination during the so-called “bloodless” coup d’etat in 1973. They united with family who had gone into exile during earlier times of upheaval and stayed for almost 20 years living in limbo during the subsequent genocide in the ‘90s. Always looking for a fresh start, Fina studied travel management and tourism in Kenya and then moved to Ottawa, Canada where she felt at home for the first time.

“When you don’t have a country, it’s easy to keep moving, searching for a place and a people who will accept you. Canada will always be my second home. They welcomed me as a resident when no one else would.”

After more than 30 years in exile, Fina returned to Rwanda with her husband and their young child to participate in the rebuilding of the country. She dabbled in agribusiness and managed Flamingo, a Chinese restaurant in the heart of Kigali. After two years, she bought out the business from the owner, an expat living in Uganda and grew it into a profitable venture with two locations before gradually closing in 2015. 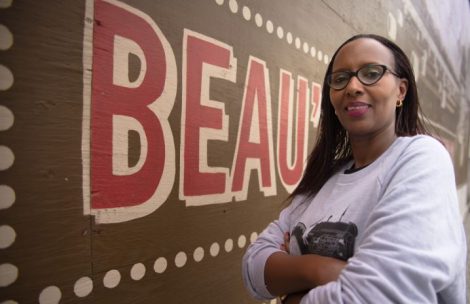 “There had been a lot of changes and when we lost our lease and had to look for new premises, I decided to stop. I felt if I was not going to do anything better than what I had achieved at that point – like open more locations or even start a hotel – then I should take a break. Running a restaurant seven days a week is a huge commitment, especially when you have three children. I spent barely any time with my family. I needed to reconnect and think about what my next steps would be,” Fina recalls.

The year she took off proved to be far from uneventful.

As a participant in the Institute for Economic Empowerment of Women’ Peace through Business mentoring programme (which targets women entrepreneurs from Afghanistan and Rwanda), Fina met Canadian Nancy Coldham, a consultant and trainer for the Rwandan cohort. The two become fast friends, and Nancy encouraged Fina to “do something bigger than a restaurant” to have a greater impact on the local economy and empower women in Rwanda. When Nancy delivered that opportunity, Fina jumped.

In celebration of their 10th anniversary, Ontario-based independent craft brewery Beau’s wanted to celebrate by giving back. They were willing to help launch a brewery by raising funds, building awareness, and offering technical training and support and brought on board Newlands a brewery builder in British Colombia, who generously donated a brew house.

“A lot of brainstorming led to a visit in Spring 2016 by Beau’s team who came here to see what I was all about and whether I was really up for this. I took them all over Rwanda and after meeting with government officials they were convinced it was doable.
I also went to Vankleek Hill where I used to live during Beau’s Oktoberfest to work on a pilot recipe with Beau’s brewmaster, Matthew O’Hara, and discuss the business of running a brewery with their CFO, Tanya Beimers.

We launched a Kickstarter to purchase a bottling line and surpassed our goal of raising CAD$95,000. It was amazing to see how successful it was. All those pledges from people across the world. It gave me hope for the next generation to see there are still people who are kind. You lose hope with all that humanity does, but when I saw the response I was overwhelmed,” she says quietly.

Steve Beauchesne, co-founder, Beau’s Brewing Company; Nancy Coldham, CG Group; Christian Riemerschmid von der Heide, COO of NSI Systems Inc.; and Fina Uwineza at Beau’s Oktoberfest 2016 in Vankleek Hill, Ontario, Canada.
The goal is to open shop in 2018. Funding is an ongoing hurdle and Fina’s open to investors. In the meantime, she is busy recruiting a local female brewer – a challenge of a different kind – who will travel to Beau’s for training, and seeking premises to start construction. Her plan is for a brew-pub that will offer tastings, food and beer for purchase. As a central objective of the project is to empower women and the community, Fina will source ingredients locally from women-run collectives.

Given that she will be opening the first craft brewery in Central Africa, Fina is surprisingly upbeat.

“The only good thing the Belgians left us was a taste for decent beer so I’m pretty confident there will be a market. We have a history of brewing traditional beer from banana and sorghum, but there are no commercial Rwandan brewers. I think people will be proud to support this venture, my only concern is whether they will drink beer made by a woman!” she laughs adding, “Men still feel like this is there domain, but we have a rich history of equality here – 60% of our Parliament is female and women are respected – so I doubt it will be an issue.”

Any concerns about returning to Rwanda and starting afresh in a new field?

I’m so proud to have come home. Getting my passport in ’96 was a huge achievement for me, but now I really get a chance to make a difference. There are great opportunities in Rwanda. Every day new buildings, restaurants and schools go up. The streets are abuzz with life. And because the country is well-disciplined, it’s easy to do business here. The sky’s the limit. So no, no worries here. I’m really happy to be part of this exciting moment.”

And we’re excited for Fina. Can’t wait to try that first batch of beer! 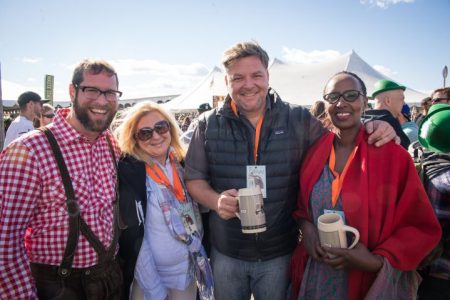 1. Above all, be honest. Integrity is fundamental to business success and real leadership.

3. Learn to look after your books. Even if you hire an accountant, you should know your numbers.

4. Take care of your employees, because when they are happy they will make your clients happy too.

This story first appeared on She Inspired Her, an online platform sharing stories of African women entrepreneurs