Does India Know the story of Vicky Roy? 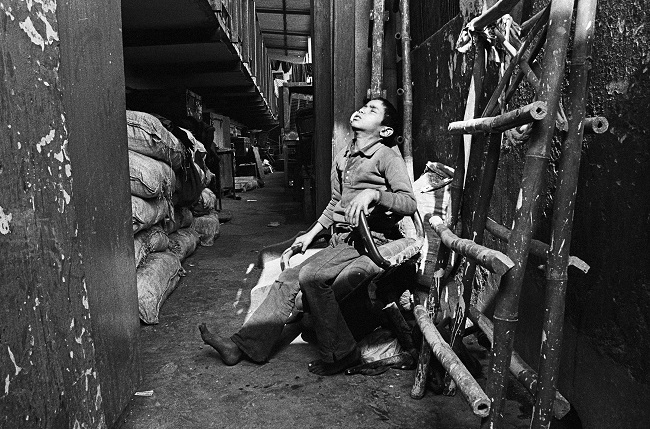 In 2009, four people from across the globe were summoned to photo document the reconstruction of the world trade center in NYC. Two of them were from the United States of America, once from Hong Kong and the other-from India. Yes, from India.

The question is: Does India know?

But let's not jump the gun here, for the story really starts years before that. It dates back to the year 1998 in a rural pocket in the district of Purulia, in West Bengal, when a little boy in shabby clothes had boarded a train to Delhi. He didn’t have a plan so to say. All he knew is, he has heard “log bade shahar jaake hero ban jaate hai!” (People go to big cities to become heroes). Or, even before that actually. 1987, when a boy child was born to a homemaker mother and a father who earned a modest fifty rupees a month- a second child, among quite a few siblings. With a rather modest budget for the many mouths that they were, the boy was packed off to his maternal grandparents bundled in hope for a better up keeping and a study support to survive the race. At least until the tenth standard boards, the parents had thought. But the style of upkeep by the grandparents – fortunately - rather cut it short. Just after the boy completed the fifth standard, he decided he could not take the beating any more. And so he went missing from the house one fine day, along with a few paltry paper notes from the wallet.

He was smart for eleven years old, or so the boy thought. However a day later, when he woke up after a long night to find himself at the crowded platform of unknown city, among unknown people speaking a tongue unknown to him almost, he was scared. 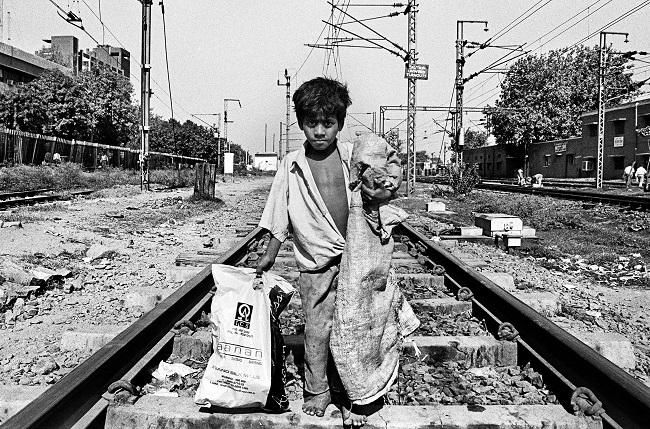 Much as he had read that landing up in the Capital can turn tables of luck, he couldn’t quite be sure of that anymore, wrapped in the cold dark of the dusty, coarse stone platform at Ajmeri gate of New Delhi station. He cried for a while, and didn’t know when, through it, he had fallen back into sleep again. And next morning, he was woken up by a few children the next morning. They asked him questions, which he could half understand and little reply to in his broken, confused dialect. They took him to the Salaam Balak Trust – a shelter for destitute – and submitted him there.

However, he found his way back to them soon in just a few days. He did not like the confines of the gated home where they kept homeless kids like him. He preferred to join the kids instead. The months that followed saw him in a series of odd jobs. Rag-picking, selling water in refilled mineral water bottles. Stealing. You name it! 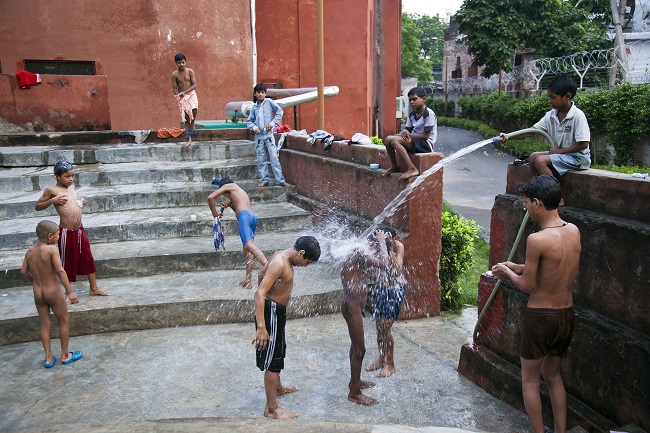 But not everyone can rest in one job for too long you see! This time, the last straw on the camel’s back was a round of a police lathi-charge. And then soon enough, the livelihood saw change in some more of permanence. Dishwashing at a roadside dhaba( eatery) . He served the local rikshawalas through the day, ate the leftovers and slept in the corner the rest of the nights.
This too went on for a while. Until, one day, change called on him again. A customer called him aside and asked: Would you want to go to school? Vicky agreed. And a new chapter of his life thus unfolded. 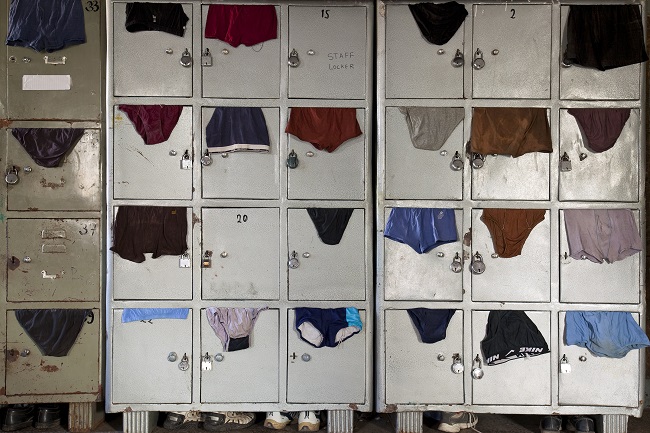 Vicky narrates the story in a rather practiced, impersonal tone. It’ll take forty to forty-five minutes, he tells me as he joins us at the table. We had been waiting for our turn as urgent phone calls were being answered one after another. This was a Sunday morning, the 16th of October 2016. Vicky is now all of twenty eight years of age. We are sitting in his house, waiting for our turn to talk to him. I look around the room as I waited. A strikingly modest set-up with a make shift kitchen, a home which he shares with another photographer roommate. Three poster-frames on the wall, and a book amongst the pile of worn out newspapers on the book-rack – the famous “Stay Hungry Stay Foolish”. Vicky finishes another important call and resumes the conversation. 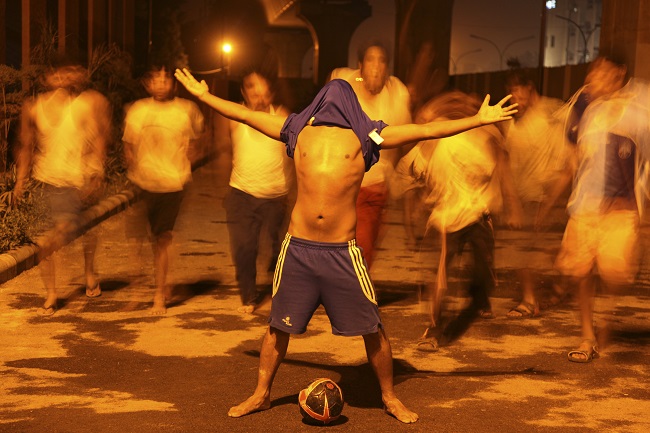 We picked up the threads at talking about his school life. Those days, there was this Kodak camera is a plastic case that was priced at 499 rupees, Vicky says. I nod – yes, I remember that. We are talking about the year 2004 now. This is when Vicky has been stroked off the list of students as the tenth grade board exam approaches. “All the previous classes, I had scored well. For I used to copy,” he adds shyly. “But in tenth, it didn’t work. I scored 48%, and that was not good enough. You cannot stay in the home after you’re eighteen any way.” So they asked him to take some vocational training instead. “List mein photography tha, toh mujhe laga wohi karte hai!” (Photography was in the list so I thought let’s do that.) He brought the camera for 499 rupees, and two roles came free with it. Meantime, he also started assisting a well-known photographer, Anay Maan, for he had to survive and three thousand rupees a month was a deal too good to turn down. Against that, Vicky would set up lights and carry the truckloads for him from one place to another, along the photography tours. 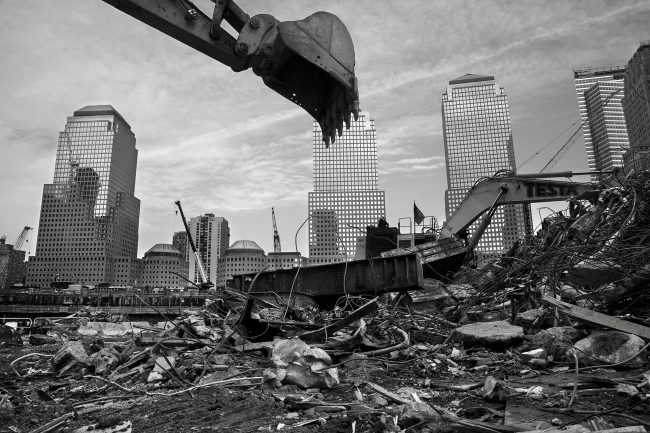 From the series World Trade Center

Little did he realize that his journey had already started… A journey, long and fated!
Cut to 2008, Vicky Roy is one of the four photographers world-wide who are commissioned to document the reconstruction of the World Trade Center. 2009 – An invite for lunch with Prince Edward at the Buckingham Palace. “What was that like?” I interrupt the flow, asking. “Well, you know,” he smiles shyly. “Sab bahar se Buckingham Palace ke photo lete hai, aur main palace ke andar se bahar ke logon ke photo le raha tha.” (Everyone clicks photos of Buckingham Palace from outside, and there I was clicking the outside from its indoors.) 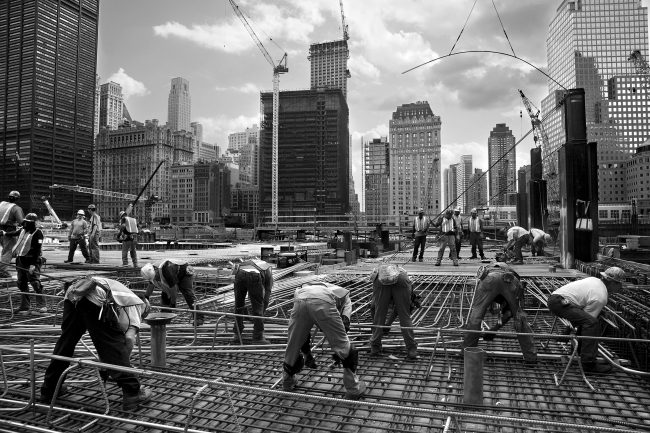 From the series World Trade Center

The journey is on. His caravan moves on a victory sprint, one country after another. And yet he turns down every job offer that comes on the way. “Kyunki mujhe Delhi mein hi rehna hai,” he insists. Because, I want to only live in Delhi.

Vicky’s story is one you have to pinch yourself hard to come out of. And yet, you cannot but ask a few questions, notice a few things. The finer sides, and unsaid words…

He brings us water in glasses, as we sit down around the table. He holds the glasses, all three of them, with his entwined fingers. Snippets come over you, instantly, before you know. You can almost see him do that as a child only until a few years back!
“Are you in touch with your rag-picking gang,” I ask. “I was in touch for long, but after a while I realized that the connections were pulling me down. They have now becomes goons mostly, you see?” He tells me without flinching.

And your home? “I went back home the first time, after 5 years of running away. Last year, I bought a land and made them a three bed room house. Here!” He eagerly takes me to his desktop and shows me pictures. He browses through his photography folders dispassionately, until he reaches the destination. Pictures of a spiral stairway, and freshly painted pink walls – the house that houses his family now, back in the rural pocket of Purulia, West Bengal. My brother is studying in Jaipur. “BBA complete kar liya,” he adds with the pride of a regular dutiful elder sibling, just like you and me. “How do you pick your subjects,” I ask. “Street Dreams”, “Home Sweet Home” – he shows me his framed works. They are necessarily a journey back in time, auto biographical, shot at the same places. “Just, faces change,” he says. I smile, unable to find a reply. 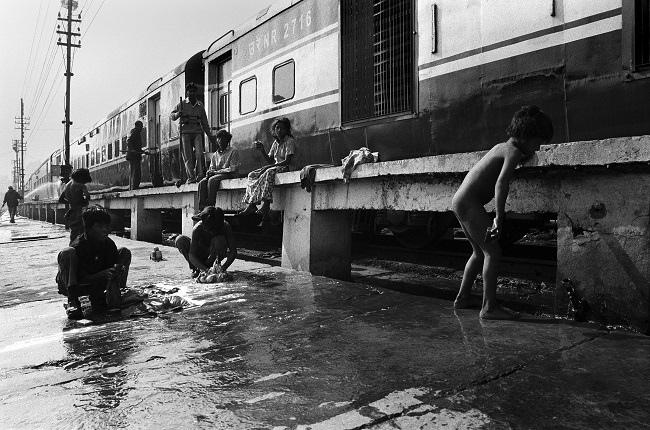 I switch off my phone recorder and proceed to wrap up. “Watch my show in the Discovery channel. It will be aired at 8 pm today,” he reminds me, standing up to pose for a photo together. “One last question,” I ask him. What about any recognition from the Indian government? “No” – pat comes his reply, brief and seemingly passing. For, for all you know, he is not one to hold on to that. Or, to anything perhaps!

He is now ready to smile for the camera, instead and for a change. And yet, I cannot but ask myself again and again: 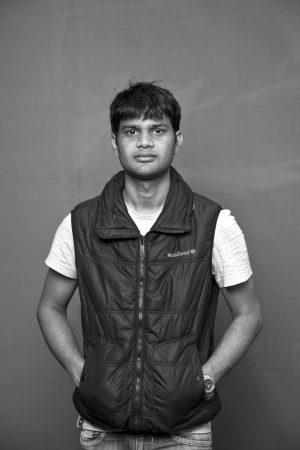 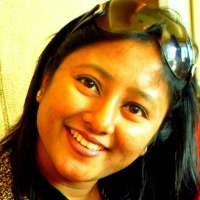 Sinjini Sengupta is an Economics major from Indian Statistical Institute, and a a qualified Actuary by profession. By passion, she is a Writer, Story teller, Poet, Columnist, Editor, Orator and also a painter and also an artist.. She paints in acrylic medium, and charcoal. She mainly writes on Feminism, Gender issues, Social reforms, Gender sensitive parenting, Spirituality and Lifestyle articles. Also Books and Film reviews among others. She writes scripts for movies and one recent movie from her story and script has made it to the Cannes Film Festival, Kolkata International film festival, Boston festival etc among others.

Comment: Interesting. Hadn't heard of Vicky Roy before. Now look forward to browsing through his work. Kudos to the young lad.