In the 1950s, a young Indian left his country behind and went to the United States of America, for his masters’ degree. At the heart of the civil rights movement, the young man made his way into Wyoming. Not New York, – but right at the heart of the U.S.. When he finished his degree in engineering and went back to India, his heart was set on the United States of America, which welcomed and cared for him with open arms. After a few years of working with the government in India, he went back to the US, family in tow. He spoke six languages, and travelled on the way back to India to several countries in South-East Asia.

Years later, his first granddaughter was born. He passed away when she was still young, just 6 months old. Little did he know that this girl would grow up to chart the world’s waters just as he had, with the same spirit of wanderlust that he had. That girl is Heera Kamboj.

A young diplomat working with the U.S. Government, Heera Kamboj has travelled far and wide. While her mother wanted her to be a doctor – Heera realized that she simply wanted a way to give back to the United States, as much as she could. In seventh grade, she realized that she had a love for languages, and wanted to do something with that for a career. In high school, Heera was an award-winning volunteer with several tolerance groups and poor communities, while also being the editor of the school newspaper. At that point, she wanted to be a foreign correspondent. She almost went to college in New York to study journalism, but wanted to move away to a new city and try something different. Heera applied to ten different colleges all at once. She was absolutely sure of making it – what with having a great academic record, advanced classes, sports, volunteering, and a great SAT score. In one day, she received five rejection letters – a painful and humbling memory. Choosing between George Washington University and Boston University, Heera picked the former, attending the Elliot School of International Affairs, located in Washington D.C. Studying at the hub of all governmental activity, she was in the midst of a world where she saw policymaking and diplomatic work taking place right before her.

In the last week of August, 2001, Heera began college. Two weeks later, midway through Comparative Politics class, her classmates’ cell phones began ringing non-stop. The teacher was annoyed by the disruption and ordered everyone to turn off their phones. When class ended, Heera and her classmates walked out to a scene where people were crying, standing numb in shock, or talking in whispers. Two planes had crashed into the World Trade Center and another into the Pentagon that morning in an incident that the world would soon know as 9/11. Heera felt her knees buckling: her father worked as an engineer at the World Trade Center. She tried reaching him, for hours at an end, but the telephone networks had crashed. Eight hours later she learned that he was safe, as he was not scheduled for work there that day. When Heera left for her dorm by shuttle, a reporter came on the radio reporting that a car bomb had exploded at the State Department. Her shuttle-bus always went past the State Department as the GW was located literally next door. Heera got off the bus and ran three miles to her dorm, fearing that the bomb was probably still there. The experience firmed Heera’s resolve: this was a field she would continue to work in.

With time, Heera began volunteering all over Washington D.C., especially on community development relating to children and homeless women. In 2002, realizing her younger brother would start school soon and her parents would have to pay for two private schools tuitions, she started researching scholarships. She chanced upon the Thomas R Pickering Foreign Affairs Fellowship. She applied to the Fellowship, with about nine others. This time, the odds favoured her, and she won four of them. She wound up selecting the Pickering Fellowship, and from that moment, there was no looking back. 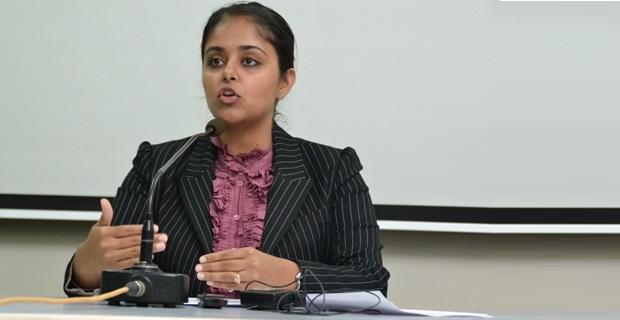 In her senior year, she took up Peace Studies as a minor, at the end of which she wrote out a paper on Feminine Peace Theory in the Middle East. She attended a conference at Harvard in her senior year, a program on Women, Peace and Security, run by Ambassador Swanee Hunt. After graduating with her undergraduate degree, Heera attended the Kennedy School of Government at Harvard University. One of the classes she took at Harvard was with Ambassador Swanee Hunt.

On the first day of that class, students were paired to introduce their neighbour to the class. Heera introduced herself to her neighbor naming all her milestones up until then. When the woman introduced herself to Heera, she was left speechless. Her neighbour was only 27, and one of the only two survivors of the Rwandan Genocide in her family, who served as a judge in her country’s reconciliation court. Heera counts that class as a life-changing experience, as she bonded with women across cultures.

After graduation, Heera started her career as a U.S. Foreign Service Officer. She went first to Mexico City, handling visas. Her next assignment took her to Afghanistan in June 2011 – which was a dream come true. She got to work on women’s rights, religious freedom. It was an exciting and new job for Heera, but at time stressful. With the Bonn Conference scheduled to happen in December, she was asked to speak with women’s groups and civil society groups there and their planned participation. She got to speak with women and factor in ways of ensuring that women’s voices were not left unheard in the conference.

In July that year, someone from the Finnish Embassy called and said that it was the U.S. Embassy’s turn to chair the Women, Peace, and Security Working Group. Heera was wary of taking on such a huge responsibility, but her bosses supported her. She networked with several civil society organizations and grass-root groups for women’s rights. Heera got to work with women and write reports on women’s rights, the legal system, women’s shelters, and civil society advocacy. Heera came to understand that though it is a conventional thing is to show women as victims, in reality, they are change-makers themselves, and it is as true of Afghan women as it is true of women across the world.

Women’s rights in Afghanistan have remained and do remain something that the world takes notice of, and the international community is working alongside Afghan women on. The key, though, Heera noticed, was not in keeping or pursuing the cause of women’s rights in isolation, but in integration with everything else. Women’s rights are human rights and for the world to progress women need to have access to their rights.
While working there, Heera didn’t think much of what she was doing in terms of a personal milestone. Her immediate supervisor nominated her for the Swanee Hunt Award for Advancing Women’s Role in Policy Formulation. When Heera had just arrived at her next assignment in Chennai, India, she heard that she had won the award. Everything had come full circle: the professor whose classes inspired and influenced Heera had been the one in whose name the award was created at the U.S. Department of State. But Heera didn’t think she won it alone: she thought that the award was a product of the efforts of her colleagues, international working groups, development agencies, law enforcement agencies, NGOs, policymakers, civil society, parliamentarians and religious leaders – and that the award truly should have gone to the women of Afghanistan. The award came with a cash prize, part of which Heera donated to Women for Afghan Women and another part to a Sikh charitable organization.

Being a woman to Heera was never challenging, but it let her see how many of her counterparts across the world were not as lucky as she was. Driven by the feeling that she has an obligation to do more for those who don’t have that much Heera hopes to make the lives of others better. If she can leave this world having made at least two people happy – “herself plus one” as she puts it, she will be the happiest person alive.

For her personal goal, Heera hopes one day, to make her fellow Americans more aware of who Sikhs are. As a Sikh woman, Heera wants to change the perspective from “American Sikh” to an “American, who happens to be a Sikh.”

Lighting candles of progress everywhere she goes, Heera is on a mission to improve the lives of as many women and men as she can, through her work.