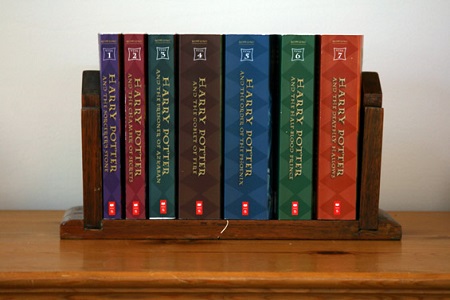 Mr. and Mrs. Dursley, of number four, Privet Drive, were proud to say that they were perfectly normal, thank you very much. They were the last people you’d expect to be involved in anything strange or mysterious, because they just didn’t hold with such nonsense.

These opening lines belong to the first book of the Harry Potter series which single-handedly, reinforced fictional reading among a generation and soon calibrated to become a cult. Harry Potter series by Joanne Kathleen Rowling has proved to be one of the most enthralling, enjoyable and provoking progression of plots, sequences and adventures which revolve around a boy who discovers magical powers. The fantasy element of magic mixed with realistic values and feelings like love, friendship, hard work, intelligence and devotion woven together created enchantment and magnetism amongst readers of all age groups.

Here are some reasons why Harry Potter has proceeded to become equivalent to any great piece of literature:

The compilation of the entire series consists of various plots which are interwoven and makes the reader go “whoa, didn’t see that coming”! The most popular and beautiful plot was the “horcrux plot” which connects Harry destroying a horcrux unknowingly in Chamber of Secrets and realising it only in the second last book. The build up after Harry carelessly spoke to a boa constrictor in the first book which actually came handy when he realised that only a parselmouth could open the chamber of secrets was another clever masterstroke.

The references
If a list was made of what made the Harry Potter books riveting, the references would definitely top. Here are few of the best references which are absolute gems:

Snape’s first words to Harry were “Potter! What would I get if I added powdered root of asphodel to an infusion of wormwood?” Which actually stood for: according to the Victorian language of flowers, asphodel is a type of lily meaning “my regrets follow you to the grave” and wormwood means “absence” and symbolizes bitter sorrow. So, Snape’s question can be interpreted as “I bitterly regret Lily’s death.

Sirius Black: The brightest star in Canis Major (a type of constellation) which depicts him being the brightest (the only pure/shining one) in the Black family. Also, Canis Major is a dog which is co-incidentally Sirius’s animagus form.

Hedwig: Saint Hedwig is considered to be the patron of orphan children who protects them from death. Thus, naming Harry’s owl Hedwig could be an indication of Hedwig giving up his life to protect Harry, who was an orphan, in the final book. 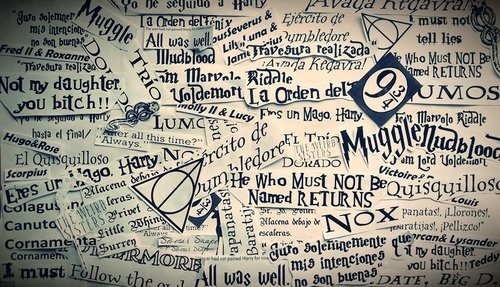 The complex characters
Harry Potter was a young boy who shows extreme courage and emerges victorious with the help of a very selfless, Ronald Weasley and an extremely intelligent Hermione Granger. The strength of characters is described best when Ron was willingly ready to sacrifice himself at the age of eleven so that Harry could go on to save the sorcerer’s stone from Snape (that’s what they believed), in the first book, and Hermione stayed back to help Harry with his extremely difficult mission when Ron, who she so dearly loved, had given her a choice between Harry and himself in the final book. The protagonist, Harry, has shown immense courage coupled with the believable feelings of a young boy every time he fought the most powerful dark wizard of all times. He was the quintessential hero with flaws of a mere human who craved love, friendship and a decent family, things he never had till the age of eleven.

Other than the three main characters, there were many others who were equally interesting: 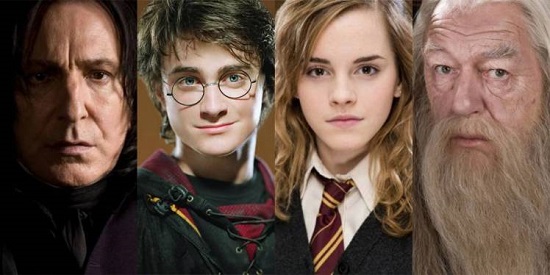 Albus Dumbledore, showing change of character from a power-hungry, great wizard to a brilliant but humble guide after the death of his sister.

Snape was the most layered character in the entire series and portrays unrequited, ever-lasting love in the most beautiful way possible. From being a devout death eater, he risked his life to protect a boy who was destined to kill his old master. It was a tough task as the boy was the son to the girl he loved forever and a man who absolutely hated. The most interesting part was the fact that he never wanted the best of his character to be revealed to anyone.

Neville Longbottom: From a scared, shy boy who rarely spoke out for himself to a brave, audacious boy who was killed a huge snake all by himself, Neville was definitely a character whose transformation we enjoyed thoroughly. 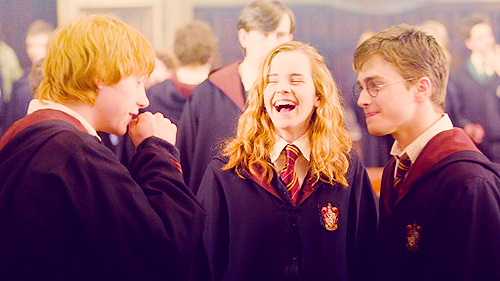 Harry Potter has evoked every kind of emotion inside the readers. Love was what the book stressed on and reinstated in every form, Voldemot, who was incapable of love, Snape’s unrequited love and Nymphadora who looked beyond age and condition and fell in love with Lupin. Nothing defines friendship better than the Golden Trio sticking through each other through thick and thin. Fred and George’s jokes and Peeves’ pranks made us laugh whilst the deaths of the deaths of Lupin, Tonks, Hedwig, Fred, Dobby, Moody and Sirius made us weep for days after we finished reading the books.

Thus, the Harry Potter series explains emotions and complexity of human characters better than any other series in modern times. The whole fantasy element is what makes it an interesting read for children whilst the understanding and deciphering of dialogues and plots is what makes it intriguing to adults. If a set of seven books can do so much for every reader who was sucked into it, the series definitely should be considered as modern literature.

Comment: Harry Potter books belong to a genre where internal consistency is a hallmark. It may appear to be simple children tales, but there are hidden perplexing secrets. Soul play a big role in the series and it is also influenced by J.R Tolkien's Lord of the rings". There are marked similarities between Homer's Odyssey and Harry Potter. The series raises various important questions 1. What is soul? Is there a after life? 2. Is destiny predetermined? 3. Do choices and not abilities reveal our true self? 4. What is an ideal government and political leadership? How should the ministry of magic be fixed? 5. Should the best rulers be disinterested in power?

Comment: Some things here I never considered. Thanks for sharing.

Comment: Brilliant take on Harry Potter. J K Rowling herself would be extremely proud of the analysis