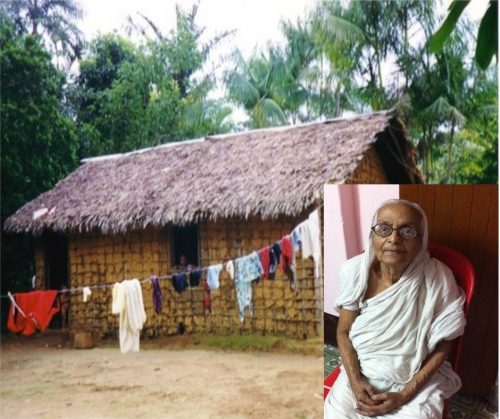 This is about late Umatara, her daughter late Anita, me Mitali and my teenage daughter - four generations. Those of you can picture a typical setting in Bengal 70-80 years ago will be able to relate to this story better.

Umatara was my grandmom; I called her 'Dida'. She always draped sarees. Saree is traditionally 5.5 by 1.2 meters of unstitched cloth and is the traditional dress of Bengal, India. She couldn't imagine wearing any other form of clothing, especially since her marriage. She draped the saree in the traditional Bengali style. Dida always her head covered with one end of the drape or pallu’, it was mandatory for a married girl of her generation and it was a sign of modesty. She was widowed in early 1980s, and thereafter the drape was plain white cotton. Colours being forbidden to Indian widows.That is what her time, space and social boundaries allowed her to opt for!

This simple, down to earth, ordinary rustic lady left for her heavenly abode in April 2016 at 90. She lived a relatively healthy life, but started losing her memory in her last years and during that time she only spoke about those who had already passed away. Due to age and memory loss, she was confined to bed for almost twenty months and finally ridden of all worldly pain.

I had very little opportunity for interacting with my dear Dida. I remember, the toughest moment was having to share the news of my mother, her third born's death with her. Conveying the news of a child's death to her mother is not easy! Dida had earlier lost two of her children when they were very young, but the day my mother passing away I went through turmoil, simply thinking about Dida’s state of mind and how best to share the news with her. 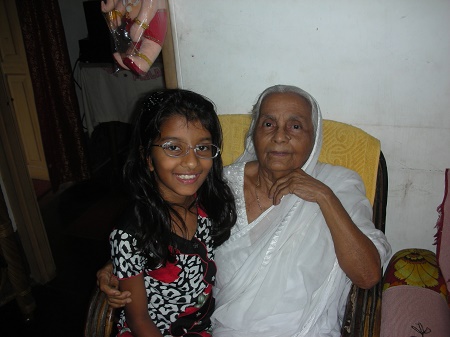 my daughter and Dida

Time and age have molded me as a person. I no longer hold grudges or harbor complaints against individuals. This is partly due to my upbringing, my liberal family, my numerous travels exposing me to different cultures, society and my friends.

But as a teenager, once I started understanding my extended family and question everything around, I yearned to ask many revolting questions to the elders of the society – thankfully, it never happened in reality or else I would have been simply branded as a disobedient offspring and my poor parents rebuked -‘This is what happens when parents sinfully have a love marriage and that too outside of the designated caste’!

It took me time, but I realized quite early in life, each one of us is a byproduct of varied life situations. 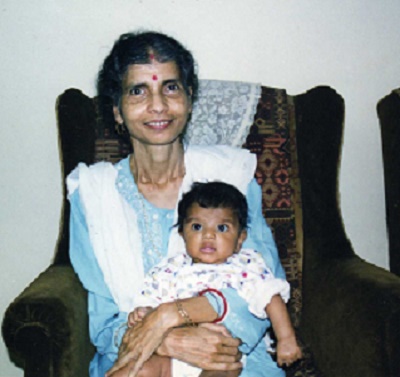 Mother with my daughter

Dida was the second wife to my grandfather (Dadu). Dadu had to marry a second time after the death of his first wife. Being a dedicated freedom fighter he had no time to look after his two motherless boys.

Dida was a teenage bride, her life was a constant struggle. Like most mothers of that time, she had to work hard and find innovative ways to feed all her children twice a day. It was the time of world war, major famine and food scarcity.

Dadu and Dida had crossed over to India from the then East Pakistan for a safer life for their children. For years, they did not have enough to eat or wear There was not enough salt at home or not enough kerosene to light a lamp after sunset.

They were all refugees even though they organised a home for themselves, everything else was a struggle for survival. Dida and other women like herself had to manage the home, all by themselves. Most of the men-folk were fighting for freedom or were active social workers.

The society was ruthless to a stepmother. However, two stepsons loved her very much and were extremely protective towards her, later in life the eldest remained a bachelor to take care of Dida, his stepmother.

When my mom turned 21, she fell in love and married my dad who was from a different caste. Marrying of your own choice was scandalous. Love marriages were not acceptable.

To complicate matters the society decided the castes were a total mismatch for matrimony. The verdict was the daughter was therefore an outcast. Meaning, she existed no more for her kith and kin, no one of her own family, would ever contact Anita.

It is hard to believe but I have personally experienced for decades how strong and deep rooted were these social abandonment. There was nobody to debate or argue against the decision. That is the reason, as a child I did not have the opportunity to know my maternal family. For a longtime, I even believed, that’s how life is all over the world, my vision was that narrow.

Due to my dad’s job we lived in another town and visited our village only during vacations.

My mother’s parental home was a few hundred meters away from ours in the village. We crossed the same path daily, members of my mom’s family simply turned their head and walk past on seeing us. My memories are of seeing my grandfather and other relatives on the other side of the three-meter wide road but never getting to speak to them.

I remember my mom cried inconsolably the day Dadu passed away, she cried for days, I was about 10.

During our trips to our village, there would be instances when suddenly my mother would say, ‘Dress up fast,we are going to Dadu’s house. She would hold my hand and we would quickly walk through the path, stealthily open the bamboo gate. As we entered, Dida would be waiting to meet us. I felt happy seeing the two ladies – hugging, weeping, while I would be busy eating coconut ‘laddoo’, ‘peda’, ‘batasha’, ‘nokuldana’with ‘murheee’ (local home-made sweets), or playing with house pets. Soon enough someone would come running, to alert Dida and we would hurriedly depart. Remember, there were no phones then!

Much later, mom explained, during our visits Dida would find one opportunity to meet the outcast daughter. It obviously needed to be at noon when no male members were at home. Dida would take help of some trusted friends or acquaintances to inform her in advance if any of them were returning home unexpectedly.

Dida didn’t want to hurt anybody’s sentiment, at the same time wanted to embrace her child and grandchildren for few minutes once a year. Dida ofcourse wrote to mom regularly.

Dida was a soft person, but was my Dadu a tough man? I wondered how could he be a freedom fighter! He served the nation and was also the strictest father in the world!

Do people need to give in to the ills of society? Can there be no exceptions? What about freedom ? Is society for us or are we for the society? I do not know my dadu’s side of the story! Maybe he had his compulsions, reasons to continue in such a miserable state. With passing years all these questions slowly melted away giving me a more profound understanding of life.

Fortunately mom’s youngest brother, Mama kept in touch with mom. When he got married, his wife, Mami invited us to their new home. I was about 20 years old by then. Dida lived with them, away from ancestral home. That is when I started visiting Dida frequently and not clandestinely.

Mami, mom and Dida always took care not to hurt the sentiments of other elders in the family. With years passing by I got to meet some of my mom’s siblings, cousins and my cousins.

One fine day I proposed to my father that if he would be okay that we invite Dida to our home and she stay with us for few days. My father agreed. Dida too agreed.

One evening I went to bring Dida accompanied by my father (that was his first visit to in-laws place after his marriage), and mom. Dida was dressed to come. At the last moment she said that, she was not able to cross the boundary set by the society, which she abide to for decades, she she couldn’t do it. She felt that she would be cheating on her late husband and elder sons!

Keeping her age in mind and her lifelong beliefs we did not push her further, we returned.

I am fortunate, I could visit Dida few times with my daughter, almost every year we went to Tripura. My daughter remembers her great grand mom even more than my mom who had passed away when she was just an year old.

Later in life I asked my aunts, how could they stay away from their sister, why did they not try to get in touch with us. The response was; when they were children they were told, what Anita did was wrong and they should never think of reaching out to her. That’s how strongly society influenced young minds.

I am very thankful to my Mama and Mami for whom I am finally in touch with most of my cousins. Some of them stay in regular contact and meet up whenever possible.

When my mom married, Dida was 44 years old. She had written to her daughter those days; ‘You made no mistake by doing what you did’! And every time I visited her later with my daughter, she told me to convey her love and best wishes to dear RK (my dad)!

At times I ask the young adults of my village, about their life and what choices they can make now. They say, it is still hard to break free of the social shackles the village imposes. Though things have progressed a lot, we have a long way to go! I wish every young adult will be able to decide independently, harmoniously and happily – whom they want to spend their life with and how.

I am the third window in time of my story. I am looking forward to witness how society shapes up our daughter – next generation. 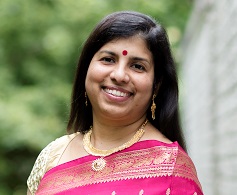 I pursued a corporate career as an Engineer and a Software Quality Process Consultant for over a decade. I have traveled to about fifty countries and three hundred cities with my husband and daughter. Have conducted Kriya Yoga programmes (mindfulness sessions) during past years in three countries. Now I continue to be a travel coach, philosophical coach, Kriya yoga practitioner, proud daughter, happy mother and an indulgent wife.