Dharavi, Asia’s largest slum, has an immensely vibrant community. It's a place in which adversity is met with optimism. Nearly every household firmly believes in working, recycling, refurbishing... Perhaps its most distinctive characteristic is the extremely close work-place relationship – every square inch of land is used to produce something. And in that spirit, its vast Tamil community has been producing ‘Vanakkam Mumbai’, Dharavi's newspaper the only weekly edited and published by local residents. Whereas news from Dharavi in mainstream press is usually about gruesome crime, communal strife or civic inadequacies, ‘Vanakkam’, a mirror of the community,reports on “real lives, which are full of challenges as well as good times”. Be it Jaya, who resides in Laxmi chawl, or Shanthi, they can’t wait to grab their copy of Dharavi's newspaper, to get a low down on not just the happenings in their busy neighbourhoods but their city, too, besides other news that is relevant to their survival and livelihood.

In 1967, Shiv Sena supremo Bal Thackeray had launched the offensive ‘Madrasi hatao, Lungi hatao’ campaign in Mumbai. As a precursor to this discriminatory movement, 'Marmkik', the Marathi weekly edited and published by Thackeray, began publishing names of South Indian officers, who held plum positions within government firms, banks and airlines. At the time, the powerful local leader openly instigated the jobless Marathi youth, who was captivated by his fiery speeches and articles. It was an open call to perpetrate violence on the white collar 'Madrasi' community. Of course, Dharavi, home to thousands of proletariat Tamils, largely blue collar workers, toiling in tanneries and illicit liquor industry, were ignored as they belonged to the 'other', the 'invisible' citizenry.

During the 1960s, for the mainstream media Dharavi didn’t exist; it wasn’t the hot topic it has become in the recent decades. But the aged Tamils living here still recall the offensive and the efforts they had made the to reach out to the white collar Tamils then shares B.M. Jeya Asir, editor of 'Vanakkam Mumbai', the sole publication to be published from Dharavi. The attacks on the south Indian community were covered by the English and Marathi press alike, but they totally missed out on the rescue operations by another set of Tamils, recalls Asir. 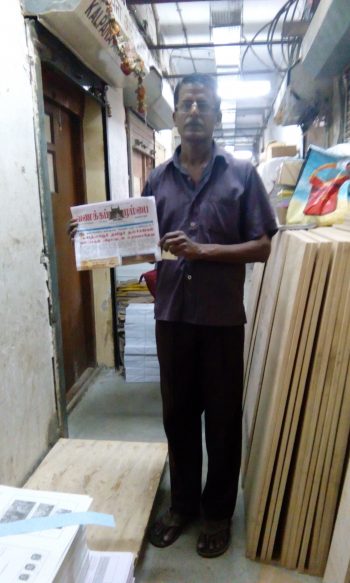 One obvious question that comes to mind as one converses with the group associated with this paper is how the area came to host such a large settlement of Tamils. The principal of the Mahatma Gandhi Memorial Secondary School, Dharavi, John S.Chelladurai, who is actively involved in the community’s activities, goes into the historical roots, albeit a bit guardedly, “The first Tamils to land up in Dharavi were the Adi Dravidas. The year was around 1920. Reasons? Drought or maybe mistreatment by higher caste… They must have felt suppressed, that’s what I have heard. Some Tamil Muslims also migrated.”

In a sense, as Chelladurai points out, Tamil migration to Mumbai had three distinct tiers, just like the caste system. He says, “In the 1920s came Adi Dravidas; in the 1940s came the Nadars, who were attracted to the business opportunities present here. Nadars are a middle caste; they mostly run grocery shops, restaurants and street food chains. In 1960s came the Thevars who are a backward caste but above the Adi Dravidas.” One of the reasons behind their invisibility all those years, the ‘Vanakkam Mumbai’ team reckons, is the fact that “people here were mostly from the lower castes and poor”.

Times, and attitudes, haven’t really changed all that much because Dharavi’s Tamils are rarely in the news in the Mumbai editions of Tamil newspapers like ‘Dinakaran’ and ‘Thanthi’ – and if at all they make to their pages, it’s usually bad news. “News about Dharavi? Only gruesome incidents like bride burning or communal strife, or civic disasters, like gutters overflowing and the like, will appear in these papers,” says Shanthi, whose husband deserted her a couple of years ago, leaving her to fend for her children single-handedly. She is a survivor who took to dress-making to get on with life and earn enough to educate her children.

While she is chatting candidly about her life and dreams, a young woman enters Shanthi’s single room home to give a dress order. Intrigued with the ongoing conversation, Jaya stays on. “Do you know Dharavi is full of deserted women? When my husband was alive he would visit my children and me only to demand money and to beat me up. He was an alcoholic,” says Jaya, who resides in Laxmi chawl where the majority of the Adi Dravida community lives. Jaya sells vegetables in two shifts.

Both Shanthi and Jaya have bravely overcome the setbacks they faced in life to emerge as confident, independent women. But then the struggles and triumphs of these single women of Dharavi have never made news. And that’s where ‘Vanakkam Mumbai’ stands out – it gives a vivid glimpse into everyday life, realities and challenges along with useful information and news.

“We started this weekly as a project, not as a business. So we consciously cover news and happenings from the entire stretch of Dharavi – right from Mahim to Sion and from Wadala to the Matunga Labour Camp. We include general news from Maharashtra and Tamil Nadu as well. We even report on campaigns and agitations around the controversial Dharavi Redevelopment Plan. The paper is printed in four colours on bond paper. We publish 5,000 copies and have a subscriber base of 3,500. It’s available on newspaper stalls across Dharavi,” elaborates S. Pandian, publisher of ‘Vanakkam Mumbai’ and proprietor of Saranya Printers, who came to Mumbai as an adolescent and started working as an apprentice in a printing press.

One subject that gets most residents rattled is the proposed Dharavi Redevelopment Plan – a matter that gets exhaustive coverage in ‘Vanakkam Mumbai’. Whereas the Dharavi Redevelopment Plans have been around since 1987, successive governments so far have failed rework it to the benefit of the slum dwellers. As such, public-private as well as residential-commercial spaces merge in Dharavi. The redevelopment plans have been created with business and industry at the centre and the residential quarters around it. This is essentially a western style urban layout. Moreover, it doesn’t take in account the fact that this is a hub of home-based work.

Presently, while developers are eying Dharavi for its potential to drive a construction boom in the city, it is actually a lively, productive space which is home to a community that is going all out to change their destinies. Over the years, ‘Vanakkam Mumbai’ has been documenting their extraordinary stories in a bid to provide accounts of this slum as territory of habitation, livelihood, self-organisation and subaltern politics. Certainly a vital and radical addition to the narratives from the Maximum City!