The summer of 2014 was one of the worst years for Rohini Devi. Three of her goats died in quick succession that year. The temperatures were soaring and all the water bodies in the vicinity had dried up. The 45-year-old remembers walking nearly six kilometres everyday under the punishing sun to fetch water that could only suffice for her family; there was never any left for her livestock. “I had to walk for hours with heavy pots of water on my head. It was really time-consuming and tiring for me. And, yet, in spite of my best efforts I was unable to get enough to provide for the animals as well,” reveals Rohini.

For most impoverished families living in the dry, rocky countryside of Rajasthan’s Sawai Madhopur district – home to the Ranthambore National Park, a major tourist attraction – livestock is a main source of income; so naturally, the loss of an animal is quite a setback. Rohini’s family of six, too, suffered heavily on account of the death of her goats.

In fact, in the past, it wasn’t uncommon for households in her small village of Bhadlav to be living on edge, owing to a severe scarcity of water in the area. Despite the fact that Sawai Madhopur receives heavy rainfall during the monsoon, earlier the rainwater used to simply run off into the drains as there was no system of water harvesting or recharging wells. Consequently, with average temperatures ranging between 35 and 45 degree-Celsius in the rest of the year, it did not take long for the rain-fed water bodies to dry up, leaving the land arid and the people parched. Fortunately, for Rohini and her community, things have taken a turn for the better this year.

The wheels of change started turning in March 2015 when Action for Food Production (AFPRO), a non-profit, with financial support from Ananda, Coca-Cola India’s social foundation, initiated a rainwater harvesting project in four villages – Bhadlav, Padli, Ulliyana and Kundera – in the area. Spread over 300 hectares and costing over Rs 80 lakhs, this development venture is expected to benefit around 2,500 homes. 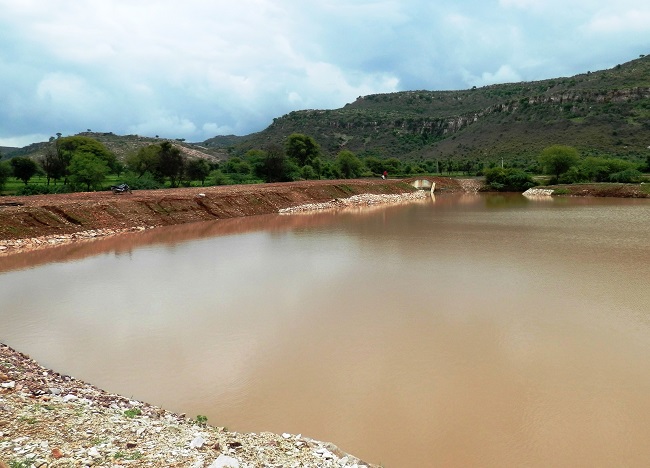 A region that used to stay parched now has an abundance of water Image credit: Alka Pande

Over the last 12 months, two earthen dams, 22 farm ponds and 34 recharge structures have been created, apart from the renovation of two existing check dams. Together, they will be able to provide a whopping nine crore litres of water to households here. “Moreover, we expect these water conservation structures to help increase the groundwater table by 5-10 metres in the initial year itself,” reveals Praveen Singhai, Regional Manager, AFPRO, adding, “These dams will help water percolate in around a two-kilometre radius.”

Whereas AFPRO and Ananda have done the groundwork as well as built the critical infrastructure, the running and maintenance will be the sole responsibility of the villagers, as “this will create a sense of ownership in them”. Recently, the formal handing over was done with much fanfare in the presence of the local Member of Legislative Assembly (MLA), Diya Kumari

As someone who has closely observed the water crisis in the area and how it has marred people’s lives for generations, she is hopeful that this endeavour would positively impact her constituents. “The dwindling water resources in these villages had always been a cause of great concern for the residents as well as administration, as it affects agricultural productivity and livelihood generation,” elaborates Diya Kumari, adding, “This watershed management initiative will certainly help farmers yield enhanced output from their land, improving the socio-economic status of the region.” Like the concerned legislator, the experts and activists involved in this initiative, too, are convinced that the newly introduced water management systems will collectively impact all aspects of life and livelihood – “it will lead to enhanced agriculture productivity, soil and water conservation, environment amelioration and socio-economic uplift of the community”.

As someone who has lived in Bhadlav since his young days Ram Singh knows what it’s like to live in uncertainty brought on by an acute paucity of water. “Earlier, the rain water used to flow into the river and in the summers everything would become bone dry. However, with the new dams and ponds not just our hamlet but others in the vicinity will benefit immensely,” he elaborates, his voice ringing with hope.

For Rohini, her livestock is her lifeline, (Image credit: Alka Pande

Singh is bang on in his assessment. For the longest time, families like his and Rohini Devi’s have had to bear huge financial burdens in the wake of damaged crops and dead livestock, threatening their very survival. Women and girls have, unfortunately, borne the biggest brunt of this deprivation: forced to spend a better part of their day first sourcing and then lugging water over great distances, they were left with little time or energy to complete other chores, including caring for the animals. However, with no option but to buck up it ended up taking a toll on them. Now, with fuller water bodies and an increased water table, things are sure to get better for them.

“The construction of these water harvesting infrastructures will certainly improve the availability of water especially in the dry season. We also expect a substantial increase in the water table after the monsoon season,” says Ishteyaque Amjad, Vice President-Public Affairs and Communication, Coca-Cola India and South West.

Apart from being a boon for the women, according to Singhai, “farmers are rejoicing at the prospect of finally having proper irrigation facilities through the year, which will enable them to produce at least two crops instead of just one like in the previous years.” Incidentally, wheat, sarson (mustard greens), jowar, bajra, soyabean, peanuts and corn are commonly grown in the area.

Rohini, who is still trying to get over the loss her family has incurred, has the final word, “I have lost my goats and so have many other women in the village; everyone has faced very tough times due to scarcity of water. I am looking forward to a better and more relaxed summer next year.”