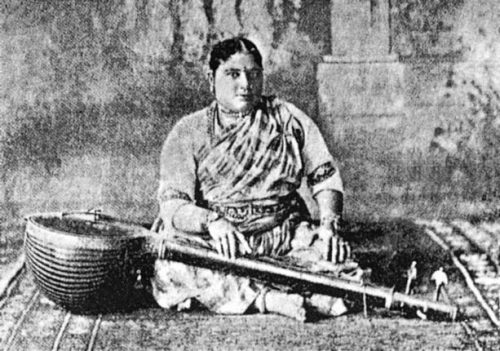 Many Indian women writers, writing in the regional language and in English have been dogged by controversies. It is not as if men writers have not faced the brunt of censorship and banned writing, they have. But women do not generally feature in ‘lists’ on banned writing or controversial writing and therefore, are relatively invisible when compared with their male counterparts.

We could trace our feet back into time and take a look at the works of two regional women writers who stand as classic examples of how and why women writers – poets and fiction writers – have been negatively projected by critics, censors and the reading world.

The first name is that of Mahadevi Akka, the 12th Century ascetic poet who wrote in Kannada. Her poetry was interpreted for being extremely radical because they revolved around the female body as a metaphor. Mahadevi Akka, while leaving the private space of the home in search of God, also abandoned her clothes. Why this denial – of family life on the one hand and of clothes on the other? Some answers were explored in Madhusree Datta’s fictionalised documentary Scribbles on Akka. (2001). For Akka, the shedding of clothes and wandering around naked in search of Lord Shiva (Chennamallikarjuna in Kannada) was a mark of protest against the sexual claims made on her body by the local king, who might or might not have been her husband. 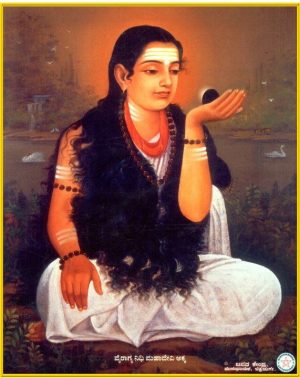 Mahadevi Akka shed her clothes as a mark of protest

Akka composed many poems, some spiritual and the others sensuous, eight hundred years before American women began burning their bras as an expression of rebellion against male-defined norms of female beauty. “Mahadevi Akka” informs Dutta “challenged social norms and discarded traditional notions of femininity in ways explosive enough to shock both men and women of her time. We rarely encounter her kind of woman who is not afraid to live out, physically and spiritually, the courage of her convictions. Today, she is a presiding deity and an icon for many women, both among the educated and among the less fortunate,” Dutta sums up. From painters to papad makers, Akka inspires women with her rousing vachanas or poems, throwing a long rope bridge across centuries so they can climb across. 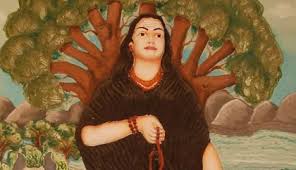 Mudullapani, an 18th century Telugu poet wrote Radhika Santwanam (Appeasing Radhika) translated in 1910 by another woman writer, Bangalore Nagaratnamma. “This long poem, brimming with rasa, was not only written by a woman but was one ho was born into our community,” writes the translator Nagaratnamma, (who belonged to the community of courtesans and court dancers and singers talented in the performing arts) adding, “I felt it necessary to publish it in its proper form.” 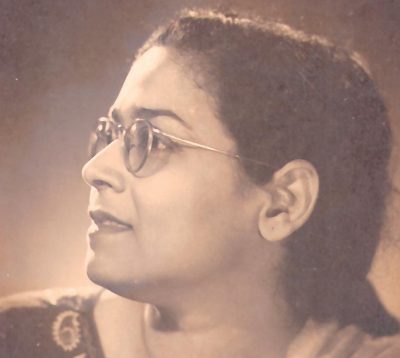 Ismat Chugtai the path breaker in the subcontinent

But men had a different take on her writings. Kandukuri Veerasalingam Panthulu, father of the renaissance movement in Andhra and himself a novelist, scornfully dismissed the poet Muddulapani as “one who claims to be an expert in music, classical poetry and dance” and renounced her work. “This Muddulapani is an adulteress,” he wrote. “Many parts of the book are such that they should never be heard by a woman, let alone emerge from a woman’s mouth. Using shringara rasa as an excuse, she shamelessly fills her poems with crude descriptions of sex.” But Nagaratnamma was not one to take such accusations lying down. She wrote back that perhaps Veerasalingam considered modesty natural only to women.

In 1911, Police Commissioner Cunningham seized all copies and the government charged Nagaratnamma’s publishers for having produced an obscene book. The ban was lifted in 1947 and reprinted in 1952 but copies could not be found till late 1980s. (Women Writing in India – 600 BC to the Present, edited by Susie Tharu and Ke Lalitha, Feminist Press, CUNY, 1991.)

What about Indian women writing in English? Ismat Chughtai is considered a path breaker for women writers in the subcontinent. Her writings focused on female sexuality and other issues revolving around the modern Muslim world. Her stories Angarey and Lihaaf were banned in South Asia due to their reformist and feminist content offending conservatives (such as her view that the Niqab, the mask worn by women in Muslim societies, should be discouraged for Muslim women because it is oppressive and feudal). 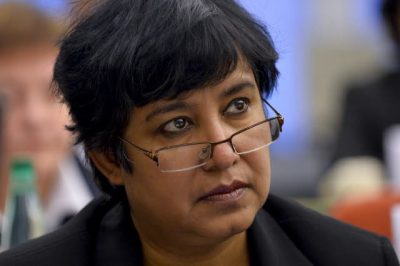 Taslima Nasreen banned from her homeland

Chughtai’s most celebrated short story, Lihaaf (The Quilt) published in 1942 in the Urdu literary journal Adab-i-Latif, was leveled with charges of obscenity and she was summoned by the Lahore court in 1944. It tackled the subject of a homosexual relationship between the beautiful begum of an aristocratic Muslim family leading a sexually deprived life in a haveli and her very ugly, pock-marked and repulsive maid narrated from the point of view of a little girl. Readers wrote angry letters to the editor of the journal demanding why such a blasphemous short story was published. Chughtai chose to contest the case instead of apologizing and won it. Here lawyer said that there were no explicit references to homosexual sex which implied that she could not be accused for obscenity.

Taslima Nasreen is not an Indian writer but she writes in Bengali which is an Indian language. Besides, she is internationally known more because her homeland Bangladesh has banned her and her writing they consider these to be seditious than for the quality of the writing itself. Censoring a piece of writing or many pieces of writing is one thing which is also open to debate and discussion and confrontation. But why ‘censor’ a real person because someone does not like her writing and feels it could lead to communal and other disturbances? She has spent time in India which finally rejected her appeals for political asylum. She has received more than routine flak for her writings portraying the condition of women in the Muslim as well as in a larger society. A human rights activist and feminist, Taslima has spoken about equality of women through Lajja (Shame) and Amar Meyebela (My Girlhood) among others.

Are the scales tilted against women but not highlighted in ‘lists’ because they are women? Think about it……..