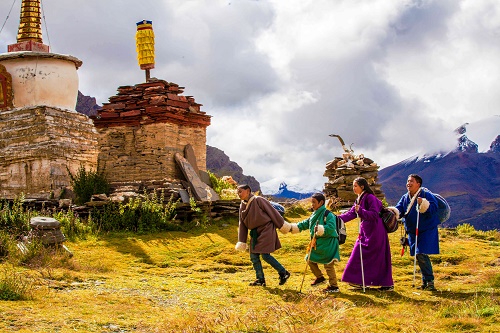 Ballad from Tibet is a film from China produced and directed by Zhang Wei who began directing films in 2010.

He studied direction at the Beijing Film Academy as well as Cinema Studies at the Chinese National Academy of Arts.  His first two films, Beijing Dream (2010) and Shadow Puppet Show of One Person, (2011), received critical acclaim. His third feature, Factory Boss (2014) won the Best Actor Award at the Montréal World Film Festival, the Fajr Award for best original screenplay at the Fajr International Film Festival, and has been shown at numerous festivals. His fourth feature Destiny (2016) won the special merit at the Bengaluru International Film Festival, besides the Best Actress Award and the Best Actor Award at the New York SR Socially Relevant Film Festival. Zhang Wei talks about his latest film, Ballad from Tibet.

What is this film Ballad from Tibet all about?

The film is based on a true story of three blind and one partially blind children from Tibet who undertake an arduous journey to realise their dreams of taking part in a reality show on television through their music and for this, they must reach Shenzhen. Do they manage to realise their dream? Who helps them in this journey towards a seemingly impossible goal and how? The film explores these questions in detail and reaches a harmonious conclusion.

What pushed you to make an entire film centered on blind children and their blind teacher?

When I was very small, I grew up in the belief that all blind men and women are fortune tellers. I would often find blind people filing out of their residence in the morning. One led the team by walking in the front and others followed by putting one hand on the shoulder of the person ahead and holding a white cane with the other hand. They all worked as fortune tellers in a specific area in the city center. At dusk, they marched back home again. 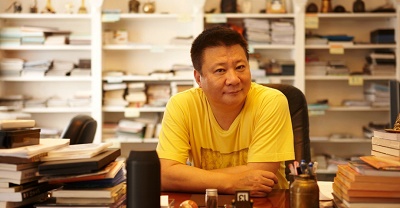 Did this belief change over time?

In a way, yes. When I moved to a big city, I no longer saw blind fortune tellers but found that many blind people work as masseuses. In 2010, I happened to watch a singing performance on a TV talent show by a group of blind students and teachers from Tibet. I was touched and inspired by them. Afterwards, I learned that the prevalence of cataract in Tibet is the highest in the country because of environmental factors. But most people believed that blindness was punishment for wrongs done in one’s previous life. This marginalized the blind and made it difficult for them to function within the mainstream. But my belief is that they are unique in their own way and have extraordinary capacities and talents. I did a lot of research and then made the film.

Are the actors who you have chosen for the film really blind?

Tibet Lahsa School for the Blind has played a significant role in this film. Right?

Right. This school was founded by blind German social worker Sabriye Tenberken in 1998. In 2010, a group of teachers and students from this school performed choral ensembles on a popular TV show called China’s Got Talent. This inspired me strongly to make a film about Tibetan blind children and their dreams. Many teachers and students in this school appeared in this film. Nyima Wangdu, the wholly blind school principal, not only appeared in the film as a teacher but also assisted the post-production team in translating Tibetan names into English. The school offered us the premises to shoot some portions of the film.

You are known to be a Harley-Davidson motorcycles fan. This played a significant role in the journey of the four blind children. Would you like to explain this?

Yes, This has a very interesting back story. In 2015, I met a friend with a similar hobby named David at a film festival in the USA. David’s twin brother had passed away at a young age and could not fulfill his dream of traveling the world on Harley-Davidson Motorcycles. In keeping with David’s request, I agreed to take his twin brother’s ashes and spread them across the globe. When I was shooting this film in Tibet, I spread the ashes at the foot of Mount Everest together with a fleet of Harley-Davidson Motorcycle bikers. Inspired by this experience, I added this small segment where these Harley-Davidson bikers help the children with lifts in one part of the journey. 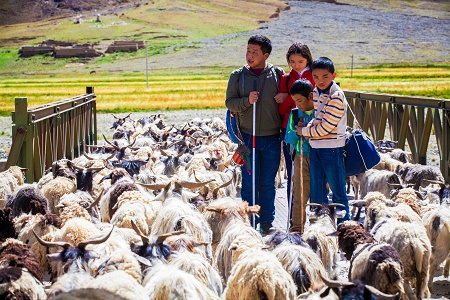 Are the bikers in the film actors or are they bikers?

None of the bikers in the film are actors. They all are real bikers and live thousands of kilometers away from Tibet. They are passionate about promoting public good and helping the weak. They participated in the extremely difficult shoot for several weeks on the Tibetan Plateau and refused to take any payment offered by the production company.

You have touched several layers of emotions and human interactions through this film. What were you really aiming at?

I was not aiming at any thing particular except trying to demonstrate the talents of blind children. But the climax said it all. Ballad from Tibet is a paean to courage and idealism. All the relevant parties realize their dreams: the Tibetan blind children got on big screen; the biker who died before his time travelled to the other side of the world with his peers; and a Chinese filmmaker completed a film in which Harley-Davidson motorcycles could gallop on the Tibetan Plateau, a marvelous scene unseen in any other films in the past.

Comment: This film is great and extraordinary. I was glad I could watch this and cried a river.thank you so much for this work and giving hope to our youngster.