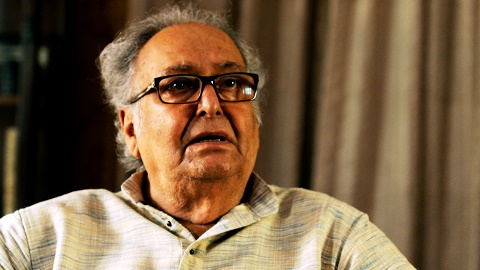 In this rat-race called Indian cinema – mainstream, mid-stream or off-mainstream, to survive for more than two decades is nothing short of a miracle. Yet, here is one actor of international renown who has hit around 60 years as an actor in films and is still running strong. His name is the legend Soumitra Chatterjee. He has done only Bengali films and is proud of having worked in 14 films directed by Satyajit Ray. At 82, in the midst of a family crisis that has his grandson in hospital following a critical car crash, news arrived on June 9 that this multi-talented personality has been bestowed Legion d’Honneur by France for his rich contribution to cinema. The title is Commander. He is the first Indian actor to be so honoured. He is in the august company of fellow Indians like Mrinal Sen, Adoor Gopalakrishnan and Pandit Ravi Shankar.

Chatterjee had already won the 'Officier des Arts et Metiers', the highest award for arts given by the French government, and a lifetime achievement award from Italy. Other awards include the Padma Bhushan and the Sangeet Natak Akademi Award for his contribution to theatre besides the Best Actor Award for his work in Podokhhep (2008) at the National Awards long after he had won the best actor award a whopping eight times by the Bengal Film Journalists’ Association (BFJA).

He has withstood the test of time and space and has become a living legend. His achievements as an actor deserve special attention because right through his career, he has staunchly stuck to Bengali cinema which, unlike matinee idols from the South, makes his visibility comparatively lesser known as a Pan-Indian actor.

Who is Soumitra Chatterjee? Amitava Nag, who has written a book on the 25 chosen films of the legend Soumitra Chatterjee, says he is an ‘enigma’ who, like Amal, the character he portrayed in Satyajit Ray’s Charulata, stormed into films to stay on for around 60 years. Is he the actor who brought characters to life in 14 films directed by Satyajit Ray beginning with Apur Sansar (1959) and ending with Shakha Proshakha (1990)? Or, is he the man who found it easier to cope with cancer at the age of 77 through The Third Act. 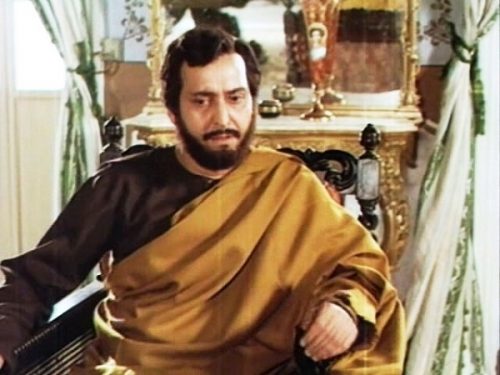 Therefore, a play he wrote, directed and acted in some years back? Actor-director-poet-writer Soumitra Chatterjee, suffering from cancer, presented his autobiography as a live stage performance. He also entered the world of jatra, a kind of travelling theatre that moves from place to place during winter and spring for some time.

The Third Act, Therefore maps the personal, social, political and historical journey his life has taken. The events that finally shaped him as an actor are mapped too – the arrival of soldiers of Netaji’s Azad Hind Fauj at Barasat packed like animals in a train, the Bengal Famine, the Great Calcutta Killing and finally, his encounter with Natasamrat Girish Chandra Ghosh. His professional life is marginalised to Soumitra Chatterjee, the man who smoked 20 cigarettes a day for 50 years till one day, his body painfully reminded him that he had stretched the borders of well-being a bit too far.

“A serious interest in cinema started with the first Film Festival held in Calcutta. I watched Bicycle Thieves, Miracle in Milan, Fall of Berlin, with friends who were film buffs. These films changed my thinking about cinema. We saw Renoir’s River, shot in India. Then came Pather Panchali. Ray made four films before he did Apur Sansar. I now feel those films were a kind of preparation for what was to come – my first film Apur Sansar,” reminisces the actor. Soumitra Chatterjee, like his mentor, Ray, is a pillar of creativity, an architect of culture as a poet with eleven published books, an elocutionist, a theatre director with around a dozen staged productions, and an editor of a prestigious literary magazine called Ekkhon (Now). 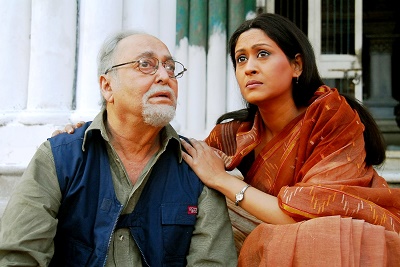 Responding to a request to point out the difference between acting on stage and acting in films, he says, “Acting in theatre is acting in real time. It is continuous, sequential, and chronological. The rehearsals for a play take care of the actor’s preparation for his role. The response too, is immediate. Cinema is not acting in real time. It is discontinuous, not sequential and not chronological. There are no rehearsals for cinema. So, it is very important that the actor prepares for his role through discussions with the director, by reading and re-reading the script. Ray had given me a three-page sketch of his own conception of Apu as a character. This helped me prepare for Apu.”

He has done around 400+ films. Besides films directed by Ray, he has acted in crassly commercial potboilers and some good mainstream films that were big box office hits. He held on to his own even when Uttam Kumar was the reigning super-star. “Uttam Kumar gave me a tremendous sense of competition. I had to deal with it on my own terms, without either imitating him, or being influenced by him. We were more like the East Bengal and Mohan Bagan football teams. Calcutta would always be divided into two warring groups when it came to choosing between the two of us. We acted together in quite a few films. I did have my box office potential as hero. I would not have lasted this long if this had not been so,” he adds.

Few know that around five years before this, he was rejected for the title role of Neelachale Mahaprabhu directed by Pashupati Chatterjee. “I went for the audition reluctantly because in those days, having nourished myself on films like Bicycle Thieves, Miracle in Milan, Fall of Berlin, etc. I had an extremely snobbish attitude towards Bengali and Indian cinema. Apur Sansar was yet to happen. I failed the screen test because I never heard anything about the film from the person who took me ever again. Believe me, it was a great relief because they had told me I would have to shave my head if finalised for the title role! I was shocked! The role was later played by Aseem Kumar,” he laughingly reminisces.

This incident has an interesting footnote. “Several years later, when I was travelling with Manik-da (Satyajit Ray) to Delhi to pick the President’s award, we met the producer of Neelachale Mahaprabhu. He proudly told Manik-da, ‘I was the one who discovered Soumitra Chatterjee.’ Manik-da who knew the whole story, told him point-blank –‘but you rejected him, you rejected him.’ He had no words to counter that with,” he laughs.

Some awards bestow honour to the recipient. Some awards are honoured by the person bestowed with them. For Soumitra Chatterjee, it would not be wrong to surmise that it is the latter.

You mal also like; Mrinal Sen at 94- a personal tribute to the maestro